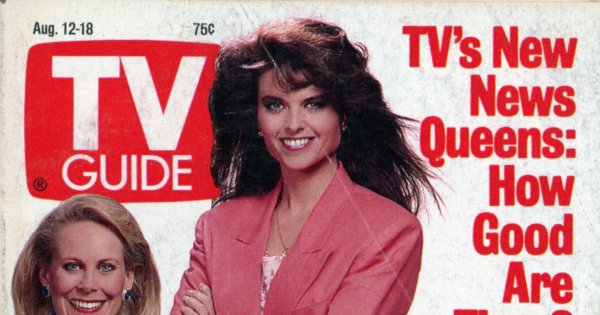 The article about a subliminal message slipped into an episode of NBC’s ALF cartoon was very interesting. A keen-eyed viewer named Ken Sobel noticed an image of the Statue of Liberty in front of an American flag, with the word “AMERICA” splashed across it while watching ALF on videotape. It was a single frame. Sobel wanted to find out where the image came from and did so with the help of TV Guide reporter Doug Hill. It was a joke, something inserted into the episode by animators working for Studio Korumi in Japan.

I’m a big fan of Cheers, so even though I usually don’t read TV Guide profiles, I did read the article about Woody Harrelson. I did not know his father was a convicted murderer. The article about the 50th anniversary of The Wizard of Oz offers a quick look at what an upcoming commemorative edition videotape will include.

“The only reasonable man on TV today is a lion who lives in the sewer and quotes poetry,” Jeffrey Cohen declares, referring to Vincent on Beauty and the Beast. Nearly every other male character is either a sexist jerk, an incompetent dolt, or a whiny loser.

I skipped the articles about Hollywood’s most outrageous homes and Bo Jackson.

There are four news reports in this week. The Pat Sajak Show has slipped dramatically in the ratings. The late-night talk show will undergo changes in the hopes of turning things around. Peter Jennings wants to work on prime time specials in addition to anchoring ABC World News Tonight. Willie Nelson is planning to launch a national, 24-hour cable channel called the Cowboy Television Network (CTN) in March. NBC let Today director George Paul out of his contract years early so he could join ABC News.

On the Grapevine contains three reports, including one about the lengths Victoria Principal goes to when researching roles.

According to The Ratings Race, both ABC and NBC saw baseball ratings drop over the past season, which likely concerns CBS, the exclusive broadcast home of baseball beginning next season.

Two of the nine letters respond to an article about Adam West published in the July 22nd issue. Here they are:

I am 23 years old and have seen my share of Batman reruns. I have also seen the movie “Batman.” The movie is enjoyable, but my all-time favorite will always be Adam West’s TV Batman. The movie may be making millions, but you can tell West he still has one loyal fan in Georgia [“Holy Acrimony! Adam West Is a Bitter Batman m,” July 22].
Patricia C. B.
Villa Rica, Ga.

In response to Adam West’s comment that his Batman was far more likable than Michael Keaton’s movie characterization, I say: He has bats in his belfry! Adam West may have made Batman popular as a spoof, but Michael Keaton’s serious, driven portrayal of Bruce Wayne, a.k.a. Batman, takes the hero out of the comics and gives him life and a sense of realism.

Saturday, August 12th, 1989
8:30PM NBC (13) (4) (22) (33) 13 EAST–Comedy
Janet and Maggie are loath to have their required physical exams, particularly when Warren (Timothy Wade) is the examiner; Kelly and Gertie make a little mistake in the nursery.

10PM CBS (11) (2D) (7) (10) (15) WEST 57TH (CC); 60 min.
A segment on former New Jersey state senator David Friedland, who was sentenced in December to 15 years in Federal prison for fraud. Friedland had tried to avoid prosecution by staging a scuba-diving accident in the Bahamas in 1985, but he was captured two years later in the Maldives. Also: a report on a crime-ridden public-housing development in Chicago. (Repeat)

Tuesday, August 15th, 1989
8PM CBS (11) (2D) (7) (10) (15) SUMMER PLAYHOUSE (CC)–Drama
In “Road Show”, a Philadelphia restaurant critic (Ellen Greene) becomes intrigued by the big-city antics and small-town charms of an enigmatic traveler (Lee Majors), and she joins him on his journeys.

9:30PM NBC (13) (35) (4) (4D) (22) (33) FM–Comedy
Debut: Robert Hays plays Ted Costas, the program director of a public-radio station in this limited-run series set in Washington, D.C. In the opener, Ted seeks to liven up a dull talk show and dull the liveliness of a fan (Michele Pawk) who wants to play.
[The series moves to Wednesday next week.]

With the exception of the article about a subliminal message in an episode of ALF, this week’s articles weren’t very interesting. On television, however, there was a new sitcom debut on NBC (FM), new episodes of 13 East, Knight & Daye, and Baby Boom, plus four different unsold pilot episodes.

That’s it for this issue. Check back next week for my review of the August 19th, 1989 issue of TV Guide. As always, hit the comments with any thoughts or reactions.