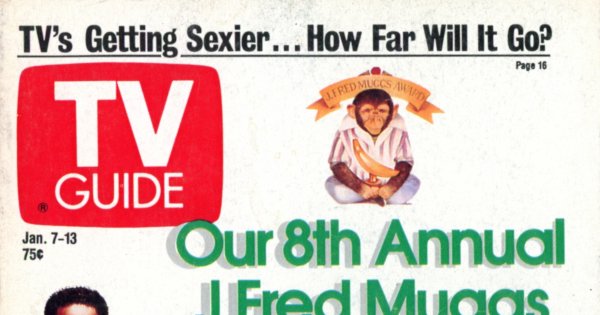 At first, I kept these issues on a spare bookcase. They were then boxed up and tucked away in a closet for years. I’ve wanted to do something with these issues, to get some benefit out of them, for several years. I’ve just never had the time. Last fall, I briefly considered reviewing every issue from the 1988-1989 season. When that didn’t work out, I decided to review a calendar year rather than a TV season.

Which brings us to today and the January 7th, 1989 issue of TV Guide. Every week for the next year, I’ll share my thoughts about the issue of TV Guide published exactly 30 years earlier. Due to time constraints, I won’t be analyzing every article published in every issue. In fact, my plan is to pick just one article. I’ll also be highlighting reviews, videocassette prices, ratings and programming notes, and listings for short-lived network TV shows.

I’m still playing around with the format, so you may see some slight changes for the first few weeks. I may even go back and add information to earlier reviews.

To me, the most interesting article is Howard Polskin’s “TV’s Getting Sexier…How Far Will It Go?” I’m not familiar with some of the programs referenced in the six-page article, like NBC’s miniseries Favorite Son or ABC’s made-for-TV movie Ladykillers. Both aired in early November 1988.

As far as miniseries go, it had the standard romantic subplots, violence and salty dialogue. If that’s all it had, it would have quickly faded from memory. But Favorite Son had some elements in it that would seem to set new standards for what’s acceptable on prime-time network television. In addition to the bondage scene, there was a steamy 60-second strip sequence where Sally rain undresses in back of a see-through curtain through which the full outline of her breast is visible, a surprisingly explicit rape and a controversial scene in which it is deliberately left unclear whether a dog is sniffing the blood of its slain mistress–or lapping it up.

Like I said, I haven’t seen Favorite Son but I’m guessing it’s quite tame by today’s standards. Back in 1989, it was part of a distinct shift on network television toward explicit content. “A new era of network television is dawning,” Polskin declares, “marked by greater acceptance of risque programming. The limits of network ‘decency’ haven’t been assaulted like this since Archie Bunker rattled the country with his barrage of ethnic slurs in the 1970s.” Where the line will be drawn in the future is anyone’s guess.

Other racy content mentioned in the article: a nude beach sketch on Saturday Night Live, Geraldo Rivera’s “Devil Worship” documentary about Satanism, an episode of Cheers featuring a scene in which Sam can’t leave a restaurant due to an erection, and episode of Designing Women involving a busty au pair.

Viewers aren’t being driven away by explicit content, which explains why the networks continue to push the boundaries. Not everyone is happy, however. “In the last year, I’ve become disillusioned,” says Television Critics Association president Art Chapman. “The programmers have to be responsible and not air material that’s on the cutting edge,” says American Association of Advertising Agencies president Leonard Matthews.

Polskin puts forth two explanations for the shift toward increasingly racy content. There are fewer network censors, for one thing. NBC got rid of its standards department entirely. Steven Bochco, executive producer of NBC’s L.A. Law, is happy with the changes. “They’ve given the programming department jurisdiction,” Bochco explains. “The practical result is that no one calls me, which I love.”

There’s also increased competition facing the networks from cable, VCRs, the new FOX network, and independent stations. Or maybe the networks are simply giving viewers what they want. Polskin seems to think that’s a bad thing:

With network censors largely put out to pasture, censorship is now more than ever left in the hands of the viewer at home with a finger on the ‘off’ button. That is a disturbing thought to those who care about the content of a medium that’s available in almost every home in the country. If audiences continue to tune in at even moderate levels, it may be ‘anything goes’ for a long time.

I’m curious to hear from anyone who remembers watching Favorite Son back in 1988 (or the nude beach sketch on Saturday Night Live). Do you recall noticing an increase in the amount of racy content on network television during that fall?

Prices from the Video Cassette Report for movies on VHS: The Blob ($89.95), Mr. North ($89.95), Vibes ($89.95), Young Guns ($89.98). Cheers ‘n’ Jeers praises Susan Ruttan for her role on NBC’s L.A. Law, applauds Almost Grown on CBS for its premise and its soundtrack, boos the “intrusive camera crews who work on cable music and comedy specials,” and scoffs at reporters who use the phrase “It all began…” when introducing a story.

Merrill Panitt reviews NBC’s Dear John. He considers the sitcom a rehashed version of Taxi with Judd Hirsch playing the same “good-natured schnook who often as not winds up a victim of his good intentions.” The pilot episode “was a textbook example of good comedy” but the next two episodes suffered from weak jokes. Panitt worries about the way Hirsch occasionally overreacts, calling him “much too accomplished to resort to such shenanigans.”

He concludes his review on a positive note while suggesting the show should be funnier considering the talent of those involved.

There are four In the News reports this week, ranging from NBC’s plan to offer limited pay-per-view programming during the 1992 Barcelona Olympics to the Harvard Alcohol Project’s mission to encourage TV producers to include anti drunk driving messages in their episodes. Also, beginning January 20th, NBC will add a pair of crime dramas to its Friday lineup: Father Dowling Mysteries at 8PM ET and Unknown Subject at 9PM ET. Starting Wednesday, January 11th, returning sitcom My Two Dads will replace Baby Boom at 8:30PM ET and a new medical drama called Heartbeat will replace Tattingers at 10PM ET. Both Baby Boom and Tattingers “will be retooled and could return later this season.”

On the Grapevine contains three reports this week, including news a spin-off of Spenser: For Hire “tentatively” titled A Man Called Hawk will debut soon on ABC, starring Avery Brooks as Hawk.

Two of the seven letters in this issue respond to an article in the December 17th, 1988 issue of TV Guide about the declining ratings for network news:

Norman J. Ornstein and Michael J. Robinson missed a vital reason for today’s shrinking news audiences [“Network Dilemma: Do You Give Viewers Good Journalism or … the Sensationalist They Prefer?” Dec. 17]. Viewers want to be told facts, not biased, opinionated, negative versions of news items selected to further a newscaster’s career or to improve a station’s ratings. To the authors’ list of advice to network news, I might add the idea of broadcasting some good news. It happens every day.
Gerry F.
Bremerton, Wash.

It shouldn’t be surprising that a Jessica McClure story or the Challenger tragedy should draw a large audience. People identify with other people. Jessica was, in effect, everyone’s child. The Challenger astronauts were American heroes, riding the rocket for all of us. News coverage of tragedies has a way of drawing people together, allowing them to set aside their differences, at least for a while. Political coverage does just the opposite, and news anchors and reporters only increase animosities when they seemingly side with one party or another and go out fo their way to create news.
Elizabeth L. F.
Ossining, N.Y.

I’m sure many viewers share similiar concerns today, both for network and cable news.

Here’s the Channel Directory for the Toledo-Lima Edition of TV Guide:

I won’t be including this in future reviews, so refer back to the review of this issue for channels listed.

That’s it for this issue. Check back next week for my review of the January 14th, 1989 issue of TV Guide. As always, hit the comments with any comments or suggestions.