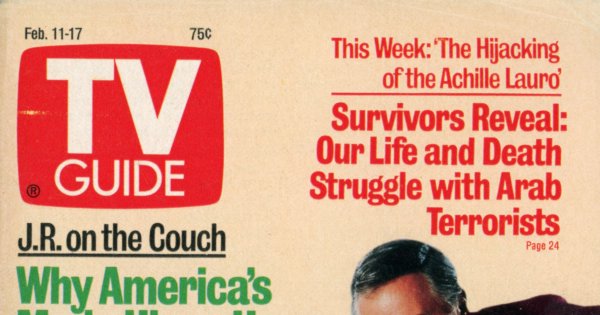 On the Cover: J.R. Ewing and Larry Hagman, by Mario Casilli

It’s hard to be sure at times, but Larry Hagman’s lengthy article about his Dallas character J.R. Ewing is a joke. “I like J.R. as much as you can possibly like a television character,” Hagman writes. He recounts meeting businessmen on flights who ask for his advice. They like J.R. Ewing. In fact, everyone Hagman meets likes J.R. Ewing.

He bends the law as much as society permits, which is a great deal. He realizes there are no hard-and-fast rules, that it is a jungle out there and that the weak perish. It is not corruption in which J.R. is engaged; that’s not what they call it anymore. It’s called “getting things done.” J.R. makes up his own laws as he goes along; whatever works–and it usually does. He’s the man that many men and more than a few women want to be. Men like the way he gets away with everything and women love his power; his power turns them on, believe me. Millions of viewers love him for it. He is, you have to admit, a very lovable villain.

Hagman defends the way J.R. Ewing uses women, but not before couching his defense as tongue-in-cheek. Consider the following: “While J.R. is using people, particularly his women, he is training them, by way of his example, in the art of exploitation. He is rendering a service, rising to become a great teacher, a guru.” If Hagman weren’t talking about a character on a TV show, this would sound disgusting. But Hagman goes on and on, praising J.R. Ewing to such an degree it’s obvious he’s being facetious.

The article about Alyssa Milano mentions an exercise video she made called “Teen Steam,” which of course can be found on YouTube in its entirety.

TV Guide asked a wide variety of politicians (and Yakov Smirnoff, for some reason) to offer advice to help Vice President Dan Quayle improve his image with the public. Some didn’t think he had anything to worry about. “I think the liberal media will do their best to keep hi down,” National Review publisher William Rusher said, “but he’s in the happy position f having nowhere to go but up.” Others insisted it was too late. “As an American,” Geraldine Ferraro offered, “I’ll pray nightly for George Bush’s good health.” Sonny Bono compared himself to Quayle (“You have to become assertive in every way you can get to get the real guy out.”) and offered to help put together a good PR program.

Merrill Panitt begins his review of Midnight Caller by lamenting how real-life radio stations “spend their money on hosts who say outrageous things on any topic to stir up listeners rather than on experts who can provide facts and guidance for their audience.” He references the controversy of an episode in which a bisexual man with AIDS intentionally infects others. “The protesters thought it was irresponsible,” Panitt writes. “But to most viewers, we believe, it was a gripping show that managed to avoid sensation while presenting an unusually honest treatment of one way AIDS is spread.”

On the Grapevine contains four reports this week. The most interesting? Dallas will film multiple episodes overseas next month, including in the Soviet Union. Plot lines have yet to be determined nor have producers revealed which cast members will be involved.

Four of the nine letters respond to the January 21st, 1989 article about rock and roll television. Here are two:

Finally, someone has taken a stand in favor of Elvis in this age of hard rock and heavy metal [“Rock Stars on TV: The Greatest Ever? Forget Springsteen, Jackson and Madonna. Elvis is Still King!” Jan. 21]. You’ve given him his due, and we, his fans, have been vindicated.
Dolores W.
Granada Hills, Cal.

Elvis Presley is not “the King.” He’s dead. Michael Jackson is the greatest entertainer in the world. He’s broken records Presley only dreamed of.
Garnet J.
Flint, Mich.

Starting this week, for programs either delayed on certain stations (mostly PBS programs) or repeated (mostly cable movies and specials) I’ve decided to only list the initial broadcast.

ABC (24) (2) (6) (7D) (21) MAN CALLED HAWK (CC)–Crime Drama; 60 min.
A deaf Gallaudet University student (William Byrd) witnesses a murder and Hawk (Avery Brooks) is hired to protect him, along with his roommate, who’s having a hard time adjusting to worsening hearing-impairment.

10PM CBS (11) (2D) (7) (15) WEST 57TH (CC)–Newsmagazine; 60 min.
Scheduled: A segment on former New Jersey state senator David Friedland, who was sentenced in December to 15 years in Federal prison for fraud. Friedland had tried to avoid prosecution by staging a scuba-diving accident in the Bahamas in September 1985, but he was captured in December 1987 in the Maldives. Also: director Henry Jaglom.

Monday, February 13th, 1989
9PM ABC (24) (2) (6) (7D) (21) B.L. STRYKER (CC)–Crime Drama; 2 hrs.
Debut: Burt Reynolds plays B.L. Stryker, a former New Orleans cop who returned home to Palm Beach to enjoy life and forget a past plagued by the murders of too many young women. But the present begins to look all too familiar when once again young socialites are being attacked by a rapist. Oz: Ossie Davis.
[“Gideon Oliver,” the third crime drama in the “ABC Monday Mystery Movie” trilogy, premieres here next week.]

Another week of February sweeps means another week of movies and specials on the networks and another issue of TV Guide packed with advertisements. I’m glad to have the Update and Letters features back this week. They provide the only useful information about the state of network television in 1989.

That’s it for this issue. Check back next week for my review of the February 18th, 1989 issue of TV Guide. As always, hit the comments with any thoughts or reactions.