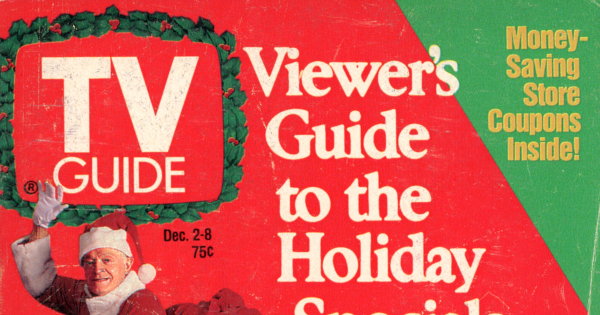 The cover article is an 11-page look at made-for-TV movies and specials airing during the first two weeks of December. Included are previews of the CBS made-for-TV movie No Place Like Home, the TNT made-for-TV movie Dinner at Eight (co-starring Lauren Bacall), the NBC made-for-TV movie Christmas in America, and an ABC variety special featuring Julie Andrews and Carol Burnett. There’s also a four-age overview of network and cable specials airing throughout December, arranged into four broad categories: Drama, For Kids, Music & Variety, and Movie Classics.

I skipped the article about the December 7th fight between Sugar Ray Leonard and Roberto Duran.

Lawrence Eisenberg’s Grapevine includes tidbits about Oprah Winfrey reprising her The Women of Brewster Place role in the upcoming ABC series, what’s in Gil Gerard’s contract should his CBS made-for-TV movie The Elite go to series, what Michael Gross wants to do now that Family Ties is over, and more. Alan Carter shares stories about John Loprieno, Judith Borne, and Elizabeth Lawrence in Soaps. Mel Durslag’s Sports View tackles the new NFL analysts CBS has hired, including Ken Stabler and Dan Fouts, who will join Terry Bradshaw.

Prices from the Video Cassette Report for movies on VHS: Badge of the Assassin ($89.95), Breaking Point ($79.98), Easy Wheels ($89.95), The Shooting ($29.98), Thunderground ($89.95), The San Francisco Earthquake ($14.95). Cheers ‘n’ Jeers praises the return of Doctor, Doctor on CBS, laments a recent thirtysomething episode for its stereotypical depiction of a gay couple, criticizes Pat Sajak and sidekick Dan Miller “for their contrived, tasteless and tacky antics” on The Pat Sajak Show, and applauds the new host of Mystery! on PBS: Diana Rigg.

There are six news reports this week. The first explores how the networks will cover the upcoming Bush-Gorbachev summit in Malta on December 2nd and 3rd.

Other reports: The networks have teamed up for “Prime Time to End Hunger,” a campaign to help raise awareness about homelessness; China Beach guest star Haing S. Ngor, who plays a Cambodian forced to fight for the Viet Cong, was tortured and nearly executed by the Khmer Rouge in his native Cambodia; Kevin Dobson will appear in an upcoming installment of Kojak, reprising his role of Bobby Crocker from the TV series; Daniel J. Travanti hopes his NBC TV-movie Howard Beach: Making the Case for Murder is appreciated by viewers and critics; upcoming NBC made-for-TV movie Hiroshima: Out of the Ashes will not film on location in Hiroshima.

Two of the eight letters respond to Robert MacKenzie’s review of Doogie Howser, M.D., published in the November 4th issue. Here they are:

Reviewer Robert MacKenzie calls Doogie Howser, M.D. a “bad idea” “Review,” Nov. 4]. I disagree. Maybe no hospital would employ a 16-year-old doctor, but who says this is the real world? I think it’s time that we relax and start seeing a few “off the wall” series on TV.
Amy L.
Lake Worth, Fla.

I don’t suppose MacKenzie ever heard of any other successful shows with preposterous premises. Are there really witches? Is there such a place as the Twilight Zone? Do horses talk?
Arlene D.
Houston

Collins takes a look at Pat Sajak and The Pat Sajak Show, which isn’t doing well in the ratings or with critics. CBS is sticking with the show and making changes to improve ratings, including cutting it from 90 minutes to an hour. Also, Collins mockingly provides a definition of the word “norville,” which means “to unseat or supplant an older co-worker but questionable but public means,” a reference to Deborah Norville replacing Jane Pauley on The Today Show.

Saturday, December 2nd, 1989
8:30PM ABC (6) (12) LIVING DOLLS (CC)–Comedy
Trish’s ex-husband (Edward Winter) moves back to New York–right around the corner–hoping not only to be closer to Rich (David Moscow), but to Trish (Michael Learned) as well.

8PM ABC (2) (6) (12) FREE SPIRIT (CC)–Comedy
Gene (Edan Gross) abuses Winnie’s niceness and gets her to “magic finger” an heirloom watch that he broke, but then he thinks he can get away with anything, any time.
[Postponed from an earlier date.]

8:30PM ABC (2) (6) (12) HOMEROOM (CC)–Comedy
Anthony (Claude Brooks) gets a break when he directs his first commercial, but the kids refuse to give Darryl (Darryl Sivad) a break when they find out he was once a practical joker.

9PM NBC (4) (5) (22) TRUE BLUE (CC)–Drama; 2 hrs.
Debut: Daring rescues are routine for the NYPD Emergency Services Unit which, in the opener, deals with a boy wedged in an elevator shaft; a suicidal jumper; a woman trapped in a car underwater; and terrorists who hijack a school bus carrying 13 children.
[An additional episode airs Friday in the series’ regular time slot.]

9:30PM FOX (36) (28) (50D) (55) OPEN HOUSE–Comedy
Linda and Ted (Alison LaPlaca, Philip Charles MacKenzie) get to know each other a little better when a bear traps them in the isolated home of a prospective client. (Repeat)

Monday, December 4th, 1989
8:30PM CBS (9) FAMOUS TEDDY Z (CC)
In order to “become” his next role as a Greek-American, a method actor with a bad-boy reputation wants to use the Zakalokis home as a study ground, as long as everything is “real.”

9PM FOX (19) (28) (50D) ALIEN NATION (CC); 60 min.
After taking a bullet in the arm to save George (Eric Pierpoint), a Newcomer patrolman dies during minor surgery performed by the director of a Newcomer clinic, who’s done quite well since his high-school days with Sikes (Gary Graham). (Repeat)

Friday, December 8th, 1989
8PM CBS (7) (9) (10) SNOOPS (CC)–Mystery; 60 min.
An estranged father seeks to mend fences with his 19-year-old daughter, an aspiring ballroom-dance instructor, but she fails to show for their meeting, and neighbors report hearing a gunshot at the studio where she hoped to teach.

9PM NBC (4) (5) (22) TRUE BLUE (CC)–Drama; 60 min.
Geneo and Wojeski confront a machete-wielding maniac (Dominic Marcus) who has commandeered a city bus; a rookie (Grant Shaw) joins the unit; Mike and Odom try to free a woman (Sandy Dell) pinned in her car after an accident; and the ESU sends in “Robocop” to handle a gunman (Billy “Sly” Williams) who’s holding a store owner hostage. Later, the cops head for the Statue of Liberty, where a distraught deaf man (Mike Lamitola) is ready to jump.

10PM NBC (4) (5) (22) MANCUSO, FBI (CC)–Crime Drama; 60 min.
Mancuso and Kristen (Robert Loggia, Lindsay Frost) probe the possibiliity [sic] that the crash of a classified stealth helicopter may have been caused by a design flaw, and not “pilot error” as claimed.

I’m sure the holiday viewing guide was useful to readers back in 1989 but it wasn’t useful or interesting to me three decades later. With November sweeps over, repeats began creeping into the schedule. Plus, NBC rolled out another new show: True Blue.

That’s it for this issue. Check back next week for my review of the December 9th, 1989 issue of TV Guide. As always, hit the comments with any thoughts or reactions.