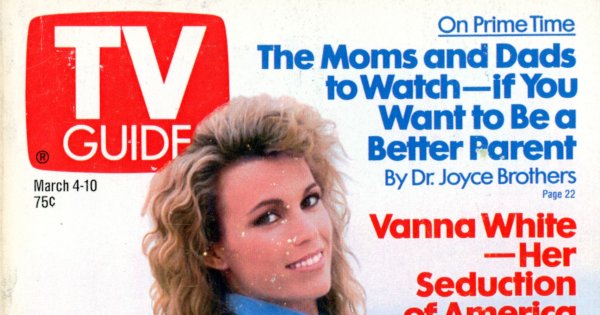 On the Cover: Vanna White, by Mario Casilli

Sadly, the article about B.L. Stryker (a segment of The ABC Monday Mystery Movie) barely mentions B.L. Stryker. Instead, it focuses on how Reynolds squandered his popularity by refusing to take acting chances and derailed his career with a bunch of box office bombs. B.L. Stryker may be his last chance to turn things around, says writer Pat Jordan.

Novelist William Styron shares his thoughts on improving television, which range from no television during the morning hours to offering more documentaries and the occasional classic sitcom like Mary Tyler Moore.

The two articles about Vanna White may have been more interesting to readers in 1989, few of whom would’ve imagined Wheel of Fortune still being on the air in 2019. As far as I can tell, the article about John Lennon has nothing to do with television. But as a brief note points out, Warner Home Video released the documentary Imagine: John Lennon on VHS on March 8th, which makes the article little more than an advertisement.

Dr. Joyce Brothers offers her thoughts on parenting as seen on television, including Roseanne from Roseanne, Danny Tanner (and Uncle Jesse and Joey) from Full House, Suzie Long Foley from Almost Grown, Elliot Weston from thirtysomething, Clair and Cliff Huxtable from The Cosby Show, Tony Micelli from Who’s the Bos?, J.C. Wiatt from Baby Boom, and Marsha Owens from Mr. Belvedere.

Prices from the Video Cassette Report for movies on VHS: Big Business ($89.95), Dear America: Letters Home from Vietnam ($89.99), The Decline of Western Civilization Part II: The Metal Years ($89.95), Flipper’s Odyssey ($59.95), Horse Feathers ($19.95). Cheers ‘n’ Jeers praises CBS drama Wiseguy for handling the temporary loss of star Ken Wahl’s due to injury, criticizes the use of “time compression” to speed up movies, applauds a running joke on The Golden Girls about St. Olaf’s, and laments the “nightly screaming matches” on CNN’s Crossfire.

Merrill Panitt spends much of his review of CBS drama TV 101 explaining the obstacles facing the show before it debuted, like finding actors to portray high school students and having to face Growing Pains and Unsolved Mysteries. The competition is why the show moved to Saturdays from its original Wednesday time slot. Many of the characters are stereotypes and the plots aren’t much better, yet Panitt isn’t entirely negative. One episode that featured a predictable storyline also included videos of students answering questions about serious topics.

“TV 101 is light diversion, professionally written and slickly produced,” Panitt concludes. “It treats current teen problems and touches all the right notes of social consciousness. So far, though, it does not make us really care whether the journalism class overcomes all obstacles and gets its next show on the air.”

There are two In the News reports this week. CBS plans to air the March 8th episode of Equalizer despite protests (and a letter writing campaign) from the deaf community because a hearing actor (Cynthia Nixon) plays a deaf character. Over on NBC, a pair of flops (Tattinger’s and Baby Boom return in April. Tattinger’s is now a half-hour comedy, and NBC has ordered four episodes while the three new episodes of Baby Boom are funnier.

On the Grapevine contains just three reports this week. Growing Pains will address teen drinking with an upcoming episode in which Carol’s boyfriend Sandy (played by Matthew Perry) drinks and drives and, in the final moments of the episode, pays the price. Pat Benatar makes her acting debut in an episode of ABC Afterschool Special on April 20th. And Brian Robbins, who plays Eric on Head of the Class, will act alongside his father Floyd Levine in an upcoming episode.

According to The Ratings Race, Hunter (NBC), Unsolved Mysteries (NBC), and Murder, She Wrote (CBS) have done well during February sweeps whule China Beach (ABC), Day by Day (NBC), and The Hogan Family (NBC) are struggling. NBC’s made-for-TV movie Swimsuit earned a 17.3/27 Nielsen rating/share on February 19th, winning its time slot. Also, the debut of Gideon Oliver on The ABC Monday Mystery Movie ranked second in its time slot with a 14.0/20 rating/share.

Four of the eight letters respond to TV Guide‘s article about Davy Crockett, published in the February 4th issue. Here are two:

Davy Crockett may not always have been a model of military disciple, but whether he was killed during the battle of the Alamo or executed afterward, he died as he lived, bravely and for lofty principles. It is for this reason that Crockett should be considered a hero for our time, rather than for the reasons Hutton states, which make Crockett look self-interested.
Phil G.
Floral Park, N.Y.

As a descendant of Davy and his brood, my grandmother was not a fan of hi either. She always said if the Alamo had had a back door, Davy would have found it…
Joan B.
North Smithfield, R.I.

Here is the Channel Directory to the Dayton edition of TV Guide:

CBS (7) (9) (10) TV 101 (CC); 60 min.
Chuck (Matthew LeBlanc) alienates Jamie (Lisa Trusel) as he tries to face up to her pregnancy, and she reveals the secret to Amanda (Teri Polo), while Chuck looks to Keegan (Sam Robards) for advice. Dr. Joyce Brothers plays herself. Part 2 of three.

10PM ABC (2) (6) (12) MURPHY’S LAW (CC); 60 min.
Murphy (George Segal) jumps at a missing-necklace case that may allow him to see the daughter he’s never met, but to get the case, he must also take claims involving a vicious dog and a burly boat captain. (Repeat)

8PM CBS (7) (9) (10) HARD TIME ON PLANET EARTH (CC)–Adventure; 60 min.
Realizing the necessity of having money, Control manipulates several ATMs to spew out a small fortune, which Jesse (Martin Kove) shares with a con man before seeing the error of his ways–and winding up in jail.

8PM ABC (2) (6) (12) FINE ROMANCE (CC)–Comedy-Drama; 60 min.
In Dublin, Michael (Christopher Cazenove) is at a loss when Louisa (Margaret Whitton) uses his paycheck to buy a horse with a partner, who suddenly disappears and then reappears the next day, only to be killed in front of her–apparently. Meanwhile, Louisa’s Aunt Grace tries to reunite the former couple. (Repeat)

NBC (4) (5) (22) UNSUB (CC)–Crime Drama; 60 min.
The team differs on how to handle a 6-year-old boy who apparently slept through the latest in a series of murders of middle-class couples whose bodies are removed from the scene. Westy: David Soul. Jimmy: Richard Kind. Ann: Jennifer Hetrick. Tony: Joe Maruzzo.

I’m now into the third month of A Year in TV Guide: 1989. It’s probably time to admit there won’t be many articles examining the state of television or offering an in-depth look at a specific TV show. I had high hopes for the article about Burt Reynolds and his new show B.L. Stryker but was once again disappointed. It was more a profile of Reynolds than a behind-the-scenes look at B.L. Stryker. I decided to include listings for NBC’s new daytime interview show At Rona’s because I’d never heard of it and because it only lasted two weeks.

That’s it for this issue. Check back next week for my review of the March 11th, 1989 issue of TV Guide. As always, hit the comments with any thoughts or reactions.