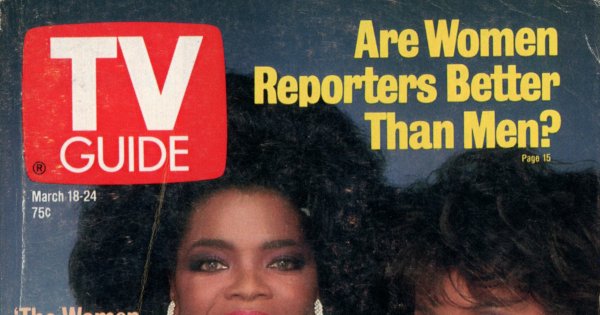 On the Cover: Oprah Winfrey, Robin Givens and Jackee, by Mario Casilli

I expected the article about ABC’s The Women of Brewster Place to be little more than a joint profile of Oprah Winfrey, Robin Givens, and Jackee. Part of it is. But the article also offers details about the production, how changes were made to the story at the request of ABC’s standards and practices department as well as the NAACP. Likewise, I almost skipped the article about scoreboard instant replays because I thought it would be boring to someone who knows nothing about sports and doesn’t watch sports. I’m familiar with the instant replay, of course, but I didn’t realize showing instant replays on scoreboards at stadiums was controversial.

I never watched any of the movie review shows mentioned in the article about TV movie critics, although of course I’ve heard of most of the critics (Gene Siskel, Roger Ebert,and Michael Medved, among others). I also never watched America’s Most Wanted and didn’t realize how popular it was right off the bat.

Merrill Panitt reviews late-night talk shows The Pat Sajak Show and The Arsenio Hall Show. Here’s what he has to say about Pat Sajak:

Host Sajak is both charming and witty–and of course, he’s cute and knows how to play to the camera. Sort of an unpretentious Jack Paar. His appealing, self-deprecating style works beautifully in a talk show. When actor Charlie Sheen admitted he once had some “serious involvement” with the police, Sajak promptly declared: “I certainly wouldn’t want to break a time-honored talk-show tradition and ask a follow-up question, so we’ll just let that go. No problem at all.”

And here’s what he has to say about Arsenio Hall:

Arsenio Hall is more of a stand-up comic. He makes faces and does little funny bits of mimicry to make his points, and that helps because the monologue material his writers have given him so far has been mediocre. In true talk-show form, he tends to overpraise his guests–especially Brat Pack movie stars and comics who come on with naive social comments and prompt screams and whoops from the most annoyingly loud studio audience in talk-show history.

Neither host is as entertaining as Johnny Carson, Panitt concludes. Not yet.

There are two In the News reports this week. The first is a lengthy look at the downfall of actor Todd Bridges, behind bars and accused of attempted first-degree murder. The second reveals how three cable services (ESPN, TBS, and CNN) earned more profit in 1988 than CBS and ABC but less than NBC.

On the Grapevine also contains two reports this week. Don Johnson hopes to co-produce a spin-off of Miami Vice focusing on the Young Criminal Unit. An upcoming episode of Miami Vice will serve as a backdoor pilot for the untitled drama. [The proposed spin-off series never materialized.]

According to The Ratings Race, NBC’s Midnight Caller has overtaken ABC’s thirtysomething in the Tuesday at 10PM ET time slot. Also, a special Monday airing of Beauty and the Beast earned the show’s lowest rating ever. NBC’s made-for-TV movie Those She Left Behind, starring Gary Cole, earned a 25.1 rating and a 38 share, making it the third highest-rated telefilm of the season so far.

Two of the eight letters respond to the second half of James Morrow’s report on children’s television, published in the February 18th issue. Here they are:

James Morrow terms Jim Henson’s Muppet Babies “twaddle.” What is his problem? Sure, some of the voices are loud and grating, but Muppet Babies’ simple themes, whimsical humor and offbeat encouragement of a child’s imagination make it one of the rare shows decidedly geared to smaller kids [“Parents’ Guide: The Best Children’s Shows on TV,” Feb. 18].
V.L. D.
New Kent, Va.

Twaddle? This season The Chipmunks has aired quality episodes on a variety of social issues. If The Chipmunks were “twaddle” I doubt the show would be in its seventh season!
Thomas H. Watkins
Associate Producer
Bagdasarian Productions

10PM CBS (11) (2D) (7) (10) (15) WEST 57TH (CC)–Newsmagazine; 60 min.
Scheduled: An extended segment on El Salvador includes an interview with Vice President Dan Quayle, who assesses U.S. policy toward the country; a preview of tomorrow’s elections; and footage of rebels fighting against the government.

ABC (24) (2) (6) (7D) (21) MURPHY’S LAW (CC)–Crime Drama; 60 min.
Murphy’s trial weekend with his daughter proves a trial for both of them–and also for Kimi (Maggie Han), who hadn’t planned on being along. Murphy: George Segal.
[The series is going on hiatus. The drama series “Men” premieres here next week.]

All five articles in this issue were interesting, to one degree or another. That was a nice change of pace. I hadn’t heard of either of the short-lived CBS sitcoms that debuted during the week (Live-In and Heartland).

That’s it for this issue. Check back next week for my review of the March 25th, 1989 issue of TV Guide. As always, hit the comments with any thoughts or reactions.