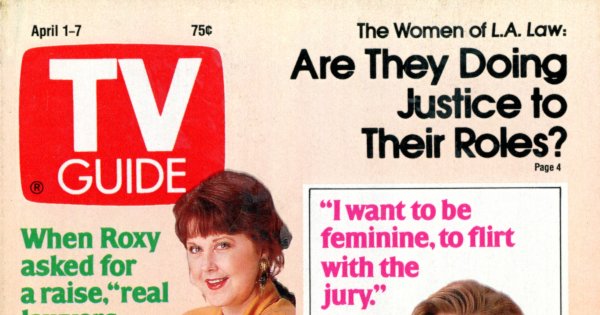 I enjoyed the article about the women of L.A. Law. It’s more than a collection of profiles about four actresses (Susan Ruttan, Michele Greene, Susan Dey, and Jill Eikenberry). They share how they researched their roles, how real lawyers have responded to their characters, and more. The article about drugs on television is interesting as well, exploring the difficulty TV shows face when trying to present an anti-drug message:

Producers say it’s hard to make a powerful point without being preachy, and harder still to train TV’s eye on drugs without unintentionally glamorizing them. They wrangle with network censors and struggle to reconcile the advice of treatment experts with the demands of good entertainment.

Poor Gary Coleman. The article about his troubled family life and financial issues is depressing, more so because unlike readers in 1989, I know how his life turned out.

I skipped the articles about Bill Cosby’s closet, the NCAA Finals, guerilla TV in Panama, and “The Case of the Hillside Stranglers.”

Merrill Panitt reviews Father Dowling Mysteries. “The plots are as full of holes as a bride’s pie crust,” he writes, “and the long, rubber arm of coincidence has never been stretched so far, but it’s all good clean fun.” He praises “the warmth and easy manner” of star Tom Bosley but criticizes the writing. Stories “follow a set pattern and create an impression of having been turned out by a computer.”

There are four In the News reports this week. The most interesting report describes how Meredith Baxter Birney used her “star clout” to get NBC to remove a taped segment from an episode of the network’s short-lived At Rona’s. Other reports include NBC News losing Connie Chung to CBS News, Brandon Stoddard stepping down as president of ABC Entertainment to run the company’s new production division, and NBC’s plan to strengthen its broadcast standards department.

On the Grapevine contains three reports this week, including one about Larry Hagman and Patrick Duffy in Vienna and another about Jack Klugman and Tony Randall reuniting for an NBC telefilm reuniting The Odd Couple.

According to The Ratings Race, the first half of ABC’s The Women of Brewster Place easily topped its competition with a strong 23.5/36 rating/share. The second half did even better, earning a 24.5/38 rating/share.

Five of the seven letters respond to Dan Wakefield’s article about religion on television, published in the March 11th issue. Here are two:

I respect Wakefield’s opinion but disagree with his views. Had he written an article suggesting that we need more programs in prime time dealing with morality, I would have danced in the sky.
David M.
New York

I want my religion in my house of worship and no place else. Occasional references to a person’s religion or observance of same are inevitable and quite acceptable on TV. But overall, prime-time TV has wisely chosen to stay clear of a very controversial subject.
Barbara G.
New York

Wednesday, April 5th, 1989
8PM CBS (11) (2D) (7) (10) (15) HARD TIME ON PLANET EARTH (CC)–Adventure; 60 min.
Another alien takes the form of a beautiful woman in its search for Jesse (Martin Kove), contributing to Jesse’s confusion about the relationships between males and females.
[Postponed from an earlier date.]

9:30PM ABC (24) (2) (6) (21) ROBERT GUILLAUME (CC)–Comedy
Debut: Robert Guillaume plays Edward Sawyer, a divorced marriage counselor who could use some kind of counseling himself in dealing with his very fatherly father (Hank Rolike) and his two teenagers (Kelsey Scott, Marc Joseph). In the opener, Edward tries to find a compatible secretary. Ann: Wendy Phillips.

The most interesting thing about this issue is the number of inserts stuck within the pages. There are at least five of them.

That’s it for this issue. Check back next week for my review of the April 8th, 1989 issue of TV Guide. As always, hit the comments with any thoughts or reactions.