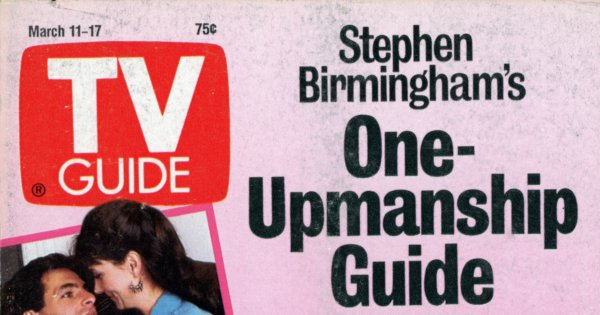 Stephen Birmingham rambles on for three pages in his cover article, presumably tongue in cheek, about which TV shows and personalities and sports are “In” and worth watching and which are “Out” and should be avoided. Except everyone knows even “Out” TV is still fun to watch. Just don’t tell anyone you watch it. Is this the sort of thing TV viewers wanted to read about in 1989?

I’ve never seen Designing Women, so I skipped the profile of star Jean Smart. I didn’t follow college basketball in 1989 (and I don’t now) so I skipped the article about which college players will make it in the NBA. The excerpt from Andy Rooney’s latest book contains a list of 53 things he doesn’t like. Maybe I don’t like them either but I didn’t read the article so I’ll never know. Not surprisingly, the article about Ringo Starr and Shining Time Station focuses more on Ringo Starr than Shining Time Station.

Merrill Panitt reviews CBS drama Almost Home, which uses flashbacks to reveal how a divorced couple met and fell in love decades earlier. He praises stars Timothy Daly and Eve Gordon as well as the use of music. He admits the show is a soap opera. “In this one, though,” he explains, “there is enough realism in the writing and imagination in the direction and performances to make it stand out.”

“Viewers will find a welcome change from the glitz, lack of realism and now-tired shenanigans of other nighttime soap operas in the appealing love story and musical nostalgia of Almost Grown,” Pannit concludes.

[CBS pulled Almost Grown off the air just weeks before this review was published. The network only aired nine of the 13 completed episodes.]

Five of the nine letters are about the CBS miniseries Lonesome Dove. Here are two:

The networks shouldn’t be surprised that Lonesome Dove did so well. We baby boomers cut our teeth on all those old TV Westerns. Let’s hear it for the Wild West–Rawhide, Death Valley Days, Wagon Train. Get along, little dogies… and make more good Westerns.
David J. D.
St. Clair, Mich.

[Beginning with this issue, a new section called TV Guide Plus replaces the Update section. TV Guide Plus includes the same categories: In The News, On The Grapevine, and The Ratings Race.]

There are three In the News reports this week. TV Guide asked a wide variety of experts, ranging from 1984 Democratic Vice Presidential Candidate Geraldine Ferraro to Tufts University Asia specialist Donald Klein, to share their thoughts on how President Bush handled his Far East trip and how the TV networks covered the trip. Also, Victoria Principal is hard at work on two proposed shows for CBS, an hour-long drama and a half-hour comedy. A pilot telefilm for the drama, Sparks, will begins shooting in June. [Sparks: The Price of Passion, aired in February 1990 and did not lead to a weekly series.] Finally, Hollywood Squares will not return in the fall of 1989.

On the Grapevine contains two reports this week. Tim Woodward will guest star in an upcoming episode of The Equalizer, playing the father of Robert McCall in a flashback. Who plays Robert McCall? Edward Woodward, Tim Woodward’s father.

According to The Ratings Race, The Pat Sajak Show has seen its once-promising ratings fall nearly every week since it debuted in January.

8PM CBS (11) (2D) (7) (10) (15) HARD TIME ON PLANET EARTH (CC)–Adventure; 60 min.
A reporter tries to help Jesse (Martin Kove) find the power-depleted Control after he suffers a misadventure at Disneyland and is taken home by a youngster, whose father thinks Control may be a threat to national security.

10PM NBC (13) (35) (4) (4D) (22) (33) NIGHTINGALES–Drama; 60 min.
Becky (Kristy Swanson) fights conflicting emotions over a visit from her parents, who don’t believe in hospitals; Sam (Chelsea Field) prepares to tell the truth about her daughter; Chris’s ex may end up being more than a guest lecturer at the hospital; and Yolo (Roxann Biggs) regrets her offer to type a report for Allyson (Kim Ulrich).

8PM ABC (24) (2) (6) (7D) (21) FINE ROMANCE (CC)–Comedy-Drama; 60 min.
Michael (Christopher Cazenove) is not Rappaport, but smugglers in Budapest think he is, much to Michael’s peril. Meanwhile, Michael may be barking for a Japanese dog food if Louisa (Margaret Whitton) can get him to heel.

This week’s article are perhaps the weakest batch yet. The changes to the program section may have helped readers keep track of what to watch (and what to record using their VCR) but it doesn’t make any difference to me.

That’s it for this issue. Check back next week for my review of the March 18th, 1989 issue of TV Guide. As always, hit the comments with any thoughts or reactions.