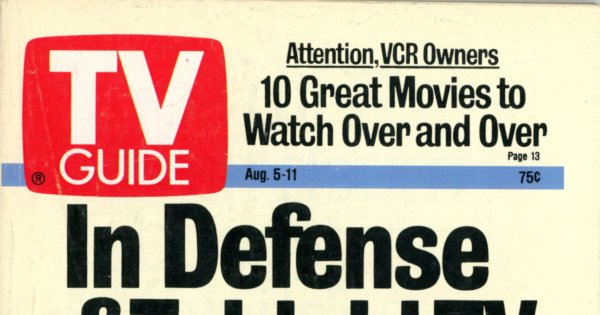 The cover article is short, only two pages of text plus a full-page photograph of Morton Downey, Jr. Within these two pages, Van Gordon Sauter makes both his support of so-called tabloid TV and his disdain for the elitists of “Establishment journalism” very clear. “It is really time for the critics to lighten up,” Sauter writes. “These tabloid talk shows can be great fun. Sometimes they are relevant. And sometimes they are even–brace yourself–good journalism.” Television journalists, he concludes, should focus on “enlarging and serving their audiences” rather than worrying about the popularity of tabloid TV.

Neil Hickey’s article about Nielsen People Meters is the kind of TV Guide article I like best. Unfortunately, it’s also just two pages long. Hickey previews the next generation People Meter, a passive computer that will scan the faces of family members watching television, instantly recognizing and recording exactly who is watching what and for how long. The rest of the article offers readers a brief refresher on People Meters. Introduced in September 1987, People Meters saw the Big Three networks lose 10% of their audience. Why? Nobody knows for sure. The People Meter is more accurate than diaries. However, they still can’t count out-of-home viewing, something that frustrates the networks.

The profile of John Stamos hits all the typical notes: his good looks, his relationships, his early life, his professional ups and downs, and his hopes for the future. “I’m starting to get to that point where I’m going to say the things I feel and be the way I am,” Stamos explains, “and that’s part of my whole growth. I’m just being myself more than I ever have.”

Here are the 10 movies Jay Cocks suggests people buy on video to “build a tape library”: Black Narcissus, Criss Cross, Dodsworth, Don’t Look Now, The Godfather (Parts 1 and 2 or The Complete Epic), The King of Comedy, My Darling Clementine, Oliver Twist, The Outlaw Josey Wales, and Pat Garrett and Billy the Kid.

I skipped the profiles of Melanie Wilson and Michele Lee, plus the article about the Senior PGA Tour.

[TV Guide Plus includes news reports and following categories: On the Grapevine]

There are three news reports in this week, including a lengthy look at turmoil on Santa Barbara, plus a lawsuit involving Peter Marshall and Bert Convy over a new game show called 3rd Degree.

On the Grapevine also contains three reports, including one about a block party CBS threw to promote its Monday lineup for the new season.

Four of the eight letters responded to an article about the best and worst of the past season, published in the July 8th issue. Here are two:

Where do you get off calling Nightingales the “Trashiest” show of the season? It was one of the few series on TV that had a little spice in its sauce. Most of them are as bland as hospital food–like your choice for “Classiest” series, The Wonder Years.
Richard L. C.
Rochester.

I disagree with Dick Friedman and Mike Lipton’s assessment of The Cosby Show’s Huxtables as “Least Likeable (and Most Likely to Slide Next Season)” sitcom family. Although it will be entering its sixth season this fall, The Cosby Show is still as funny and original as ever.

ABC (24) (2) (6) (7D) (21) CHAIN LETTER (CC)–Thriller; 60 min.
The Messenger of Death (Ian McShane) sends a book editor a chain letter, but when she dismisses the missive, he sends temptation to dog her, followed by “great evil.” A pilot not on ABC’s announced fall schedule.

If only TV Guide had published more articles like the one about People Meters found in this issue rather than bland profiles. Viewers had another somewhat busy week, with new episodes of 13 East, The Smothers Brothers Comedy Hour, and Knight & Daye, plus five more unsold pilots on ABC and CBS.

That’s it for this issue. Check back next week for my review of the August 12th, 1989 issue of TV Guide. As always, hit the comments with any thoughts or reactions.