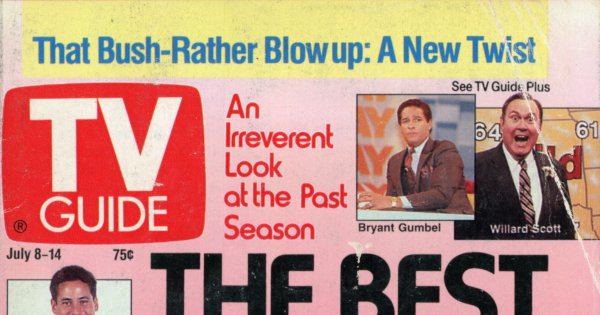 On the Cover: An assortment of TV stars and personalities

As the cover declares, the lengthy review of the 1988-1989 TV season in this issue is “an irreverent look” at the best and worst of television. Categories include Wittiest Newsroom Ensemble Since Mary, Lou, Murray, Ted and Sue Ann Ankled WJM, The Yuppie Blues (or Don’t Worry, They’re Still Happy) Award, Most Smashing Tabloid-TV Show Since Geraldo Got Hit by That Chair, Best New Excuse for Showing Up Late to Work, Still the Sexiest Performance Since Fawn Hall Stormed Capitol Hill, and Great Moments in Western Culture Award. In other words, this is not a serious examination of the 1988-1989 TV season.

However, it does feature a two-page look at TV ratings from the 1988-1989 season: prime time series, specials, theatrical movies, miniseries, soap operas, sports, TV-movies, morning news shows, evening news shows, and network averages. The list of prime time series includes 83 shows that aired six episodes or more between September 19th, 1988 and April 16th, 1989. It’s not a complete list, however, because while three FOX shows (Married with Children, America’s Most Wanted, and 21 Jump Street) are on it, several other lower-rated FOX shows aren’t. Low-rated shows from the other networks are likely missing as well.

After seeing the title, I had to read the one-page profile of Patti D’Arbanville and her tattoos. She plans to get one more in honor of her son but that’s it. “I don’t think a man should go out with a woman who has more than seven tattoos.”

I skipped the articles about Sally Jessy Raphael and eccentric baseball players.

The Video Cassette Report features a list of which pay-cable channels have exclusive rights to some of the most popular movies released on videocassette. Cheers ‘n’ Jeers praises the “resurgence” of NBC’s Hunter, laments Showtime’s “maddening” movie schedule, applauds “The International Rock Awards” on ABC, and thanks the makers of VCRs.

[TV Guide Plus includes the following categories: On the Grapevine, and Soap Opera Guide.]

There are no news reports this week but there is a excerpt from The Acting President: Ronald Reagan and the Supporting Players Who Helped Him Create the Illusion That Held America Spellbound by Bob Schieffer and Gary Paul Gates.

On the Grapevine also contains two reports, one in which fashion designer Nolan Miller critiques prime time TV fashion and another about the next season of Tour of Duty.

Three of the eight letters respond to an article about The Wonder Years, published in the June 10th issue. Here are two:

I think that anyone who has a pleasant memory of junior high school will have five unpleasant ones to match. After watching the first episode, I immediately felt like doing my homework or covering some school books.
Anthony S.
Union, N.J.

I am tired of reading about how original The Wonder Years is. It’s merely an updating of the premise Jean Shepherd has been using in his movies, books and PBS specials about his boyhood for many wonderful years of his own.
William M. S.
Salem, Ore.

ABC (24) (2) (6) (7D) (21) ROBERT GUILLAUME (CC)–Comedy
While Edward and Ann (Robert Guillaume, Wendy Phillips) reflect on their first date together the night before, Pamela (Kelsey Scott) prepares for her first date ever.

Friday, July 14th, 1989
9:30PM ABC (24) (2) (6) (7D) (21) MORNING GLORY (CC)
Two talent bookers on a Pittsburgh morning talk show can pull a ratings coup-and save their jobs–if they can get a couple to return to the show after their 63-year marriage unraveled on TV the day before. A pilot not on ABC’s announced fall schedule.

Finally, a new summer scripted show debuts. I hadn’t heard of Knight & Daye before. It ran for just seven episodes. Two aired this week back in 1989, so I should find listings for it in the next five issues. NBC also burned off an episode of Baby Boom, almost seven months after pulling the sitcom from its schedule in December 1988. And ABC offered viewers yet another unsold sitcom pilot.

That’s it for this issue. Check back next week for my review of the July 15th, 1989 issue of TV Guide. As always, hit the comments with any thoughts or reactions.