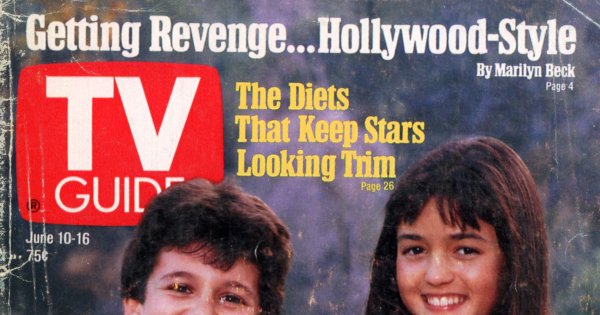 On the Cover: Fred Savage and Danica McKellar, by Tony Costa

I didn’t watch The Wonder Years during its original 1988-1993 run on ABC but I did manage to watch nearly every episode when the show aired in syndication on Ion Television a decade or so ago. Being familiar with the show, I decided to read the profile of Fred Savage. It’s short, just two pages, and covers what you’d expect. David Handler’s article examines how watching The Wonder Years brought up unhappy memories of his time in junior high. “Junior high was the cold, cruel world,” Handler declares. “Junior high was hell.”

Marilyn Beck’s article about “getting even” in Hollywood includes several interesting anecdotes. Woody Harrelson somehow managed to get a photograph of a naked Ted Danson in the shower spliced into the gag reel shown at the yearly wrap party. Alan Alda annoyed his M*A*S*H co-stars by riding around on his sports bike so one day Mike Farrell hung the bike from the studio ceiling.

The article about Marshall McLuhan is little more than a brief overview of his 1964 book Understanding Media: The Extensions of Man. “Had he not died just as the so-called electronic revolution was really gathering force,” Neil Hickey suggests, “he surely would have given us sharp perspectives on the VCR craze, on high-definition TV, laser discs and direct-broadcast satellites.”

There’s also a sidebar in which Tom Wolfe, Ted Koppel, Dick Cavett, and Robin Leach (plus ALF) share their thoughts about McLuhan.

I skipped the articles about baseball, Jay Leno, and dieting.

Prices from the Video Cassette Report for movies on VHS: A Cry in the Dark ($89.95), Deepstar Six ($89.95), Letting Go ($79.95), The Prince of Pennsylvania ($89.95), My Stepmother Is an Alien ($89.95). Cheers ‘n’ Jeers praises the Simpsons shorts on FOX’s The Tracey Ullman Show, criticizes the networks for airing “wishy-washy docudramas” based on controversial news stories, applauds William Devane’s performance on Knot’s Landing, and laments cable channels like Nick at Nite and TBS “hacking up” classic sitcoms.

R.C. Smith is a fan of “fresh and gripping” Cops. “What makes the show feel raw and authentic is its focus on moments of confrontation between police officers and drug traffickers, prostitutes and battering boyfriends.” The suspects are what keep Smith watching because to viewers who don’t break the law, “the suspects end up looking like desperate versions of ourselves, which is often what they are.”

[TV Guide Plus includes the following categories: In The News, On the Grapevine, and Soap Opera Guide.]

There are two In the News reports this week. The first asks whether technology and live television broadcasts can help the democracy movement in China. The second examines winners and losers from the 1988-1989 television season. Night Court was a winner despite seeing its ratings drop 20% because it performed well after moving to Wednesdays from NBC’s powerhouse Thursday lineup. The Wonder Years saw its ratings dip until ABC moved it back to Tuesdays. Married with Children was a big winner for FOX, more than doubling its ratings from last season. But Empty Next, Dear John, and Anything But Love are potential losers because high ratings may be inflated by successful lead-ins.

On the Grapevine contains three reports. Head of the Class will lose three castmembers (Jory Husain, Tannis Vallely, and Leslie Bega) when the sitcom returns in the fall. Joan Collins plans to produce and star in a four-hour made-for-TV movie based on her novel Prime Time. Beauty and the Beast probably won’t incorporate star Linda Hamilton’s pregnancy into the show’s storyline next season.

Two of the eight letters respond to an article about Roseanne Barr published in the May 20th issue. Here they are:

Of course, I don’t know Roseanne Barr, so I can’t tell if the article about her problems on the set is true [“Her Tumultuous Year: Temper! Temper! Behind Roseanne’s Backstage Battles,” May 20.] But, as for the insiders and unnamed crew members quoted, only cowards bad-mouth people and hide behind anonymity. I don’t know of many workplaces where everyone works harmoniously, and in a business full of creative egos, is it surprising that everyone doesn’t always mesh? Roseanne must be doing something right. Just look at her ratings.
Joan I.
Brookhaven, Pa.

Apparently I am in the minority, but I cannot stand Roseanne. Quite a few people have obstreperous kids, a messy house, money problems and are overweight. The problem with Roseanne is the grammar Barr’s character uses. I have never heard anyone speak so ignorantly. It’s a slap in the face to the class of person she portrays. First-grade children can conjugate a verb better than Roseanne!
M.L. T.
Corvallis, Ore.

10:30PM CBS (11) (2D) (7) (10) (15) DOCTOR, DOCTOR(CC)–Comedy
Debut: Dr. Mike Stratford (Matt Frewer) is an eccentric but conscientious Rhode Island general practitioner who, in the opener, is practically pushed over the edge by pressing partners, a girlfriend who wants to move to Pittsburgh, a missing patient and the task of promoting his first novel.

Finally, a new scripted summer debut on one of the networks. I’d never heard of CBS sitcom Doctor, Doctor before spotting the advertisement in this issue. Although it survived for three seasons, not a single one of them was a full season. The first season consisted of just six episodes, the second had 15 episodes, and the third had 19 episodes (one of which never aired in the United States).

That’s it for this issue. Check back next week for my review of the June 17th, 1989 issue of TV Guide. As always, hit the comments with any thoughts or reactions.