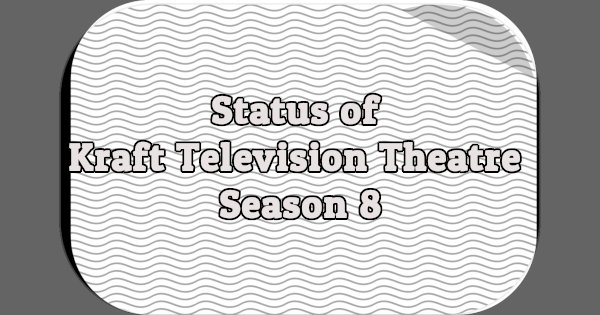 Season 8 of Kraft Television Theatre premiered on September 1954 and ended in September 1955. There were no pre-emptions. NBC broadcast 52 episodes this season, of which at least 23 survive. Rod Serling’s acclaimed “Patterns” aired to such acclaim on January 12th, 1955 that Kraft Television Theatre staged it again four weeks later on February 9th.

The Library of Congress (LOC) has 15 episodes from this season in its collection. The Museum of Broadcast Communications (MBC) has eight. The UCLA Film & Television Archive (UCLA) has seven. The Paley Center for Media (Paley) has three. Together, these four institutions have copies of 23 different episodes.

Keep in mind that just because the big TV archives/museums only have certain episodes doesn’t mean there aren’t additional episodes of Kraft Television Theatre from the 1954-1955 season out there somewhere.

In 2009, The Criterion Collection released The Golden Age of Television on DVD.