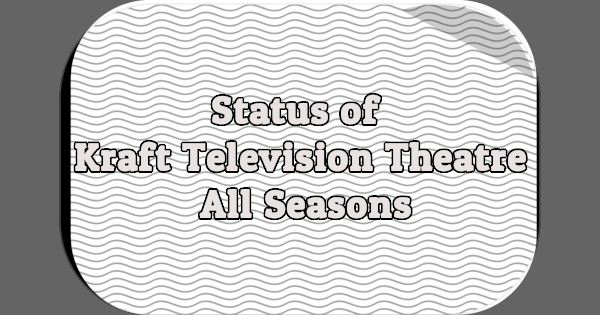 Kraft Television Theatre produced 586 episodes on NBC between May 1947 and October 1958. The series ran year-round with no summer breaks, meaning it didn’t have traditional seasons. I’ve aligned my status guides with episode lists and guides available online, like those found at the Internet Movie Database and the Classic TV Archive.

Of those 586 episodes, at least 225 survive today. Episodes can be found in the collections of The Library of Congress, The Museum of Broadcast Communications, The Paley Center for Media, The Peabody Awards Collection, and The UCLA Film & Television Archive.

The following table shows how many episodes were produced each season, how many survive, and how many are still missing. Click on the links for individual Status Guides for each season.

The Hubert Chain Collection at The Library of Congress contains fragments from two additional Season 1 episodes: three minutes from the June 24th, 1947 episode (“I Like It Here”) and a two-minute silent excerpt from the February 25th, 1948 episode (“Alison’s House”).

Keep in mind that just because the big TV archives/museums only have certain episodes doesn’t mean there aren’t additional episodes of Kraft Television Theatre from the 1955-1956 season out there somewhere.