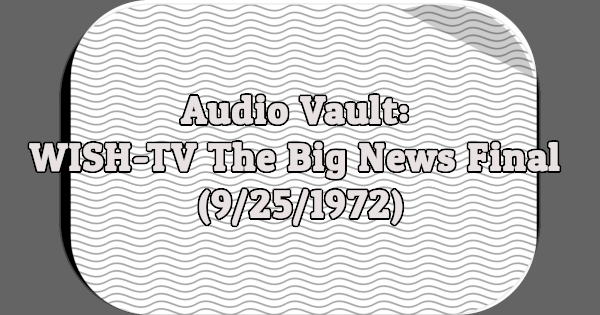 I believe Mike Ahern is one of the anchors of this installment of The Big News Final, which I think aired from 11-11:30PM ET on Monday, September 25th, 1972. Also featured are WISH-TV reporters Sid Thompson and Frank Phillippi as well as CBS News reporter Bruce Hall.

Here’s a list of the news stories in the recording:

The recording runs a little under 14 minutes and is likely incomplete. Both the opening and closing are included but the commercial breaks have been edited out.

Is this an otherwise lost television program? I don’t know for sure but there’s a chance this audio is all that survives of this particular newscast. I tried to contact WISH-TV, which is currently affiliated with The CW, but never heard back.