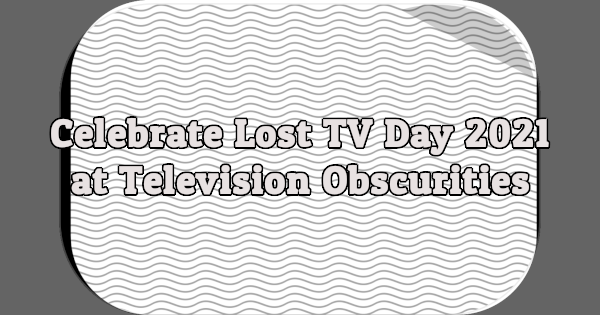 Today is Lost TV Day at Television Obscurities! This is something I’ve wanted to do for more than a decade. I had big plans for the inaugural Lost TV Day but as always happens, didn’t have the time to finish everything.

What is Lost TV Day, you ask? It’s simple: Lost TV Day is a day dedicated to commemorating lost and missing television programs.

Why today? I picked July 1st for Lost TV Day because on July 1st, 1941 the first authorized television commercials aired in the United States on WNBT in New York City. It was a historic moment for the television industry but today is a forgotten milestone.

I have several blog posts scheduled throughout the day. You’ll be able to listen to audio from a September 1972 installment of Indianapolis TV station WISH-TV’s The Big News Final newscast that may be an example of a lost TV program. You’ll learn how many episodes of Kraft Television Theatre survive. And you’ll read about an on-air announcement NBC reportedly made about Star Trek in March 1968.

Also, you can find my Status Guides for TV shows like CBS Playhouse, Eye Witness, Cavalcade of Stars, The Mike Wallace Interview, and Vacation Playhouse. Plus, you can revisit my Tales of Lost TV and Tales of Recovery columns.