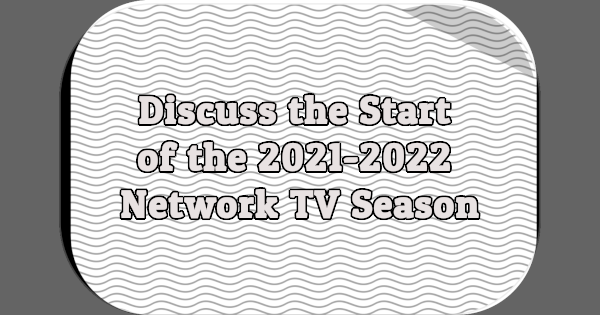 The 2021-2021 network TV season gets underway tonight. Every year from 2009 to 2019, I posted a poll asking readers to predict which new network TV show would get cancelled first. But network television has changed so much over the past ten years. Shows that were quickly cancelled just five years ago would be considered hits today. And the ratings hit new shows average today would’ve been quickly cancelled five years ago. Plus, there are now so many streaming services, not to mention all the basic and premium cable channels, that keeping track of the few dozen new network TV shows debuting each fall is hard for even the most avid viewer. There are hundreds of scripted TV shows airing throughout the year, every year.

Given all the competition, the networks aren’t as quick to make cancellations, often opting to reduce episode orders rather than abruptly pulling new show off the air. And cancellation decisions for new shows premiering this fall may not be made official until next May when the networks unveil their schedules for the 2022-2023 season.

Are you excited to watch any of these new shows? Have you even heard of any of them? I’ll admit I’m tentatively excited about NBC’s La Brea even though it’ll probably be cancelled after half a season with no resolution. Or maybe it will go the way of Manifest and develop a large enough following to ensure a streaming service will pick it up after a few low-rated seasons on NBC.

Which of the new shows debuting over the next few weeks do you think will survive the entire 2021-2022 season? I haven’t read all that much about most of the new shows but I think The Wonder Years on ABC seems to have some momentum and will likely get picked up for the full season. Likewise, I’m guessing CBS will stick with NCIS Hawai’i, FBI: International, and CSI: Vegas for the full season. And The CW will probably renew 4400 because it renews almost every show.

Will any of these new TV shows return next fall? Or will they all become new obscurities?