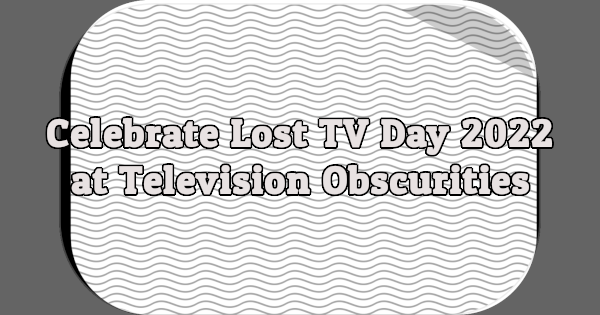 Today is the second annual Lost TV Day at Television Obscurities, a day dedicated to commemorating lost and missing television programs. I chose July 1st for Lost TV Day because on July 1st, 1941 the first authorized television commercials aired in the United States on WNBT in New York City. This historic moment for the television industry is a forgotten milestone today.

As part of Lost TV Day, I’ll be sharing a few seconds of unidentified television footage from one of my family’s 8mm home movies from 1970. Could it be “lost” television? I’ve also put together a case study examining the status of CBS network programming from Tuesday, October 20, 1964 including Captain Kangaroo, As the World Turns, Art Linkletter’s House Party, The Red Skelton Hour, and The Doctors and The Nurses.

Check out the out the TV’s Lost & Found section of Television Obscurities, where you’ll find an article about preserving television audio and an essay about how TV stations in New York City covered the attack on Pearl Harbor on December 7th, 1941.

I’ve compiled more than 30 Status Guides that list which episodes of specific TV shows are missing. Here’s a selection:

Here’s a selection of my Tales of Lost TV posts about TV shows or programs missing and presumed lost:

And here are some of my Tales of Recovery posts, which reveal how lost TV programs were found:

Be sure to follow me on Twitter (@tvobscurities) because I’ll be tweeting about Lost TV Day all day long using the hashtags #LostTVDay and #LostTVDay2022.