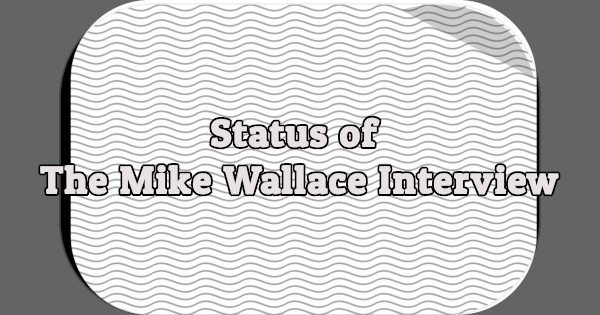 A total of 72 episodes of The Mike Wallace Interview were broadcast by ABC between 1957 and 1958. The series premiered on April 28th, 1957 and was sponsored by Phillip Morris through the April 18th, 1958 episode. The Fund for the Republic then sponsored a 13-week set of interviews entitled “Liberty and Freedom” (one of which was never broadcast) followed by an additional six episodes. The final broadcast took place on September 14th, 1958.

My article about The Mike Wallace Interview can be found here.

The Harry Ransom Center at the University of Texas at Austin has 66 of the 72 episodes of The Mike Wallace Interview. Five are only available as audio recordings while the rest are kinescopes that have been digitized and made available for viewing online. The Ransom Center also has a transcript of the Ben Hecht interview (broadcast February 25th, 1958) but no audio or video. One of the episodes the Ransom Center does not have a copy of is the controversial Mickey Cohen broadcast from May 19th, 1957.

According to Steve Winston, Associate Curator of Film at the Ransom Center, “There are reports that the BBC still has some excerpts though we have not been able to locate the specific department that might hold them. Other than that, the interview appears to be lost.” Audio of the Cohen episode is part of Archival Television Audio, Inc. collection.

Also missing from the Ransom Center’s collection are the two retractions read by ABC’s Oliver Treyz on May 27th and December 14th. According to Winston, “We have no idea why the footage was not included in the kinescope. We don’t know if they were removed later, or if they were never recorded in the first place.” Archival Television Audio, Inc. has the May 27th retraction read by Treyz.

(According to a December 1957 article in The Los Angeles Times, a filmed “stand-by interview” with Evelyn Rudie was always ready to be used in the event a guest didn’t show up. It is not included in the episode count and its current whereabouts are unknown.)

3 Replies to “Status of The Mike Wallace Interview”