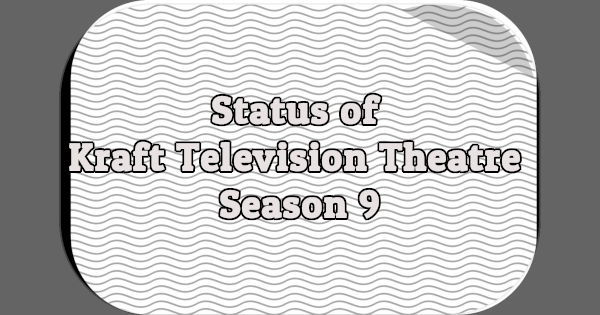 Season 9 of Kraft Television Theatre premiered on September 1955 and ended in September 1956. There were two pre-emptions, one in March 14th, 1956 for a documentary about Adolph Hitler and the other on August 22nd, 1956 for coverage of the Republican National Convention. NBC broadcast 49 episodes this season, of which at least 34 survive. The network also rebroadcast one episode (“A Night to Remember”) using a kinescope recording of the live broadcast from earlier in the season.

The Museum of Broadcast Communications (MBC) has 24 episodes from this season in its collection, one of which is incomplete. The UCLA Film & Television Archive (UCLA) and The Paley Center for Media (Paley) both have 11. The Library of Congress (LOC) has just one. Together, these four institutions have copies of 34 different episodes.

Keep in mind that just because the big TV archives/museums only have certain episodes doesn’t mean there aren’t additional episodes of Kraft Television Theatre from the 1955-1956 season out there somewhere.

*The Museum of Broadcast Communications has an incomplete version of “Starfish” in its collection.