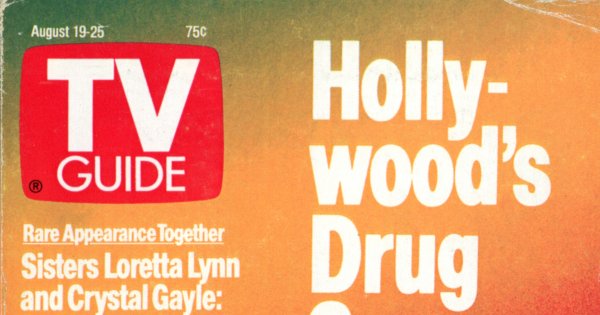 On the Cover: Crystal Gayle and Loretta Lynn, by Bill Bernstein

This may be the least-interesting issue of TV Guide I’ve reviewed this year, filled with three profiles, a book excerpt, an article about drugs in Hollywood, and a very brief analysis of the sets seen on morning network talk shows. I skimmed the article about Hollywood’s drug scene, which claims cocaine is no longer considered hip and cool so it isn’t used as heavily–and as openly–as it once was. Hollywood has become anti-drug, both on screen and behind the scenes. Those that still use cocaine do it alone, secretly, fearful of negatively impacting their careers.

I skipped the excerpt from Tony Dorsett’s book Running Tough as well as the profiles of Loretta Lynn and Crystal Gayle, Edie McClurg, and Ilene Graff.

[TV Guide Plus includes news reports and the following categories: On the Grapevine]

There are four news reports in this week, including a long one examining why Roseanne Barr wasn’t nominated for Emmy Awards. There are also articles about a pair of biopics about Rock Hudson, Sam Donaldson’s thoughts on PrimeTime Live, and Connie Chung’s new CBS newsmagazine (a reworked version of West 57th).

On the Grapevine contains just two reports, one about pregnant actresses playing pregnant characters on television and the other about Rick Springfield’s upcoming CBS made-for-TV movie Nick Knight.

Four of the nine letters respond to an article about Married…with Children published in the July 29th issue. Here are three:

Married… is hilarious and fresh. It offends exactly the right people (people who, according to John Cleese, need to be offended). It’s the only intelligent, grown-up, American-produced TV show on any network. I deeply resent wealthy women who have nothing better to do than try to control what I watch.
Malcolm K. M.
Indianapolis.

Yes, Married…with Children is occasionally raunchy. So was Shakespeare. So what?
Martin W. S.
Springfield, Mo.

It seems to me the show’s creators get a big kick out of an unfunny lack of taste. This dull, humorless, soft-porn “comedy” needs all the promotional effort Fox can muster to give the illusion of audience support.
Mary J. M.
Portland, Ore.

Tuesday, August 22nd, 1989
8PM CBS (11) (2D) (7) (10) (15) SUMMER PLAYHOUSE (CC)–Science Fiction
Rachel Morgan (Joanna Going) is the marshal of a sleepy human “Outpost” on the planet Icarus, but her colony is threatened when a vicious alien named Regnad arms a group of native Icari and leads them on the warpath.

9:30PM NBC (13) (35) (4) (4D) (22) (33) FM (CC)–Comedy
Lee-Ann (Patricia Richardson) returns to the station when Ted (Robert Hays) begins interviewing candidates for his assistant, including the son of a potential station benefactor and a now gorgeous woman Ted used to baby-sit.

Readers had little to enjoy in this issue and not much to watch on television, either. return of football filled multiple hours this week. The networks only offered one unsold pilot (Summer Playhouse on CBS). There were also a new episodes of 13 East and FM plus the second “pilot” episode of flop newsmagazine Yesterday, Today & Tomorrow.

That’s it for this issue. Check back next week for my review of the August 26th, 1989 issue of TV Guide. As always, hit the comments with any thoughts or reactions.