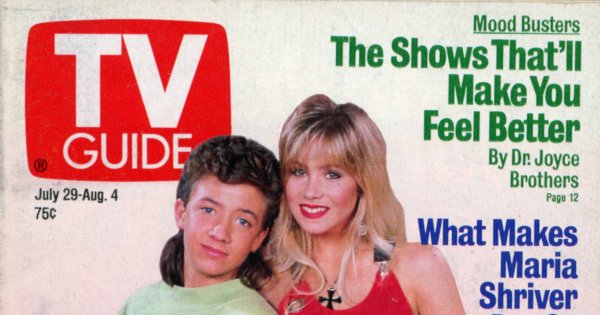 This week’s cover article examines the controversial FOX sitcom Married…with Children. I’m not a huge fan of the show but I’ve seen enough episodes to know the characters and situation. I also knew a little bit about the boycott led by Terry Rakolta, which is discussed in the article. By today’s standards, the show is tame but back in 1989 it was considered crude and raunchy both by fans who enjoyed the humor and critics who hated it. The article suggests Rakolta’s boycott may hurt the show, but ratings remained solid (by FOX standards) and Married…with Children stayed on the air until 1997.

According to Dr. Joyce Brothers, shows like Roseanne, L.A. Law, Jake and the Fatman, The Golden Girls, and thirtysomething are among the TV shows that have improved mental health in the United States. Why? By offering laughter, boosting self-esteem, and therapy for lonely viewers. “For the lonely, watching almost any show at a particular hour each day or week structures time that might otherwise be empty and forbidding,” Brothers writes. “Hearing a familiar voice, seeing a familiar face, becoming part of someone else’s family, if only for a moment, provides comfort. Soap operas and sitcoms serve as security blankets, objects of solace that are as soothing to many viewers as favorite dolls or teddy bears are to children.”

Although distributor Viacom claims otherwise, syndication expert Richard Kurlander tells TV Guide that The Cosby Show has been “disappointing” in off-network syndication, for the most part. It does well in some markets but loses its time slot to cheaper competition in others. It is also not acting as a “station maker” the way Viacom promised, allowing stations to build afternoon or evening lineups around The Cosby Show.

I had never heard of prankster Joey Skaggs before reading the one-page article about him in this issue. The article about Charnele Brown is another “The Scoop” half-page box containing a handful of facts about the actress.

I skipped the articles about Maria Shriver, Louis Armstrong, and Hulk Hogan.

[TV Guide Plus includes news reports and following categories: On the Grapevine, The Ratings Race, and Soap Opera Guide.]

There are four news reports in this week, ranging from Walter Cronkite’s reaction to being left out of a CBS News special about the Apollo 11 Moon landing to predictions that Dick Ebersol may run both the NBC News and Sports Divisions.

On the Grapevine contains three reports. Good Morning, America is replacing its couch and Ron Perlman is releasing an album of poetry readings.

According to The Ratings Race, Totally Hidden Video has averaged a 10.5/20 Nielsen rating/share for its first two episodes, helping to boost FOX’s Sunday lineup.

Four of the nine letters responded to an article reviewing the 1988-1989 season published in the July 8th issue. Here are two:

Beauty and the Beast was on your “Out” list [“Reviewing the Past Season The Best and Worst,” July 8]. Is this because it has intelligent stories with moral values, memorable characters and real romance? (Not to mention poetry and music?) Apparently you believe that “quality” is “out”–since you put PBS on your “Out” list, too.
Don H.
Newport Beach, Cal.

Why does TV GUIDE applaud China Beach while repeatedly criticizing Tour of Duty, when both shows are critically acclaimed? Favoritism seems to be a regular TV GUIDE feature: The Cosby Show is in disfavor because you prefer Roseanne. And how dare people Watch [sic] Nightingales instead of Wiseguy! How about fewer staff opinions and more impartial reporting?

Sunday, July 30th, 1989
7PM NBC (13) (35) (4) (4D) (22) (33) JIM HENSON (CC); 60 min.
Muppet Central is plagued by bags of talking garbage or, as they like to call themselves, “previously essential material.” Guest k.d. lang tries to sweeten the situation by singing the garbage theme song “I Love Trash” as well as “Waltz Me Once Again Around the Dance Floor.” Also: John Hurt tells the story of Sapsorrow (Alison Doody), a princess “cursed by a ring but blessed by a slipper.”
[Last scheduled show. Next week, “The Magical World of Disney” airs at this time.]

8PM ABC (24) (2) (6) (7D) (21) MICK AND FRANKIE (CC)–Drama; 60 min.
A former collegiate football star is easily persuaded to help his ne’er-do-well younger brother, who says he’s making it big in his new line of work–as a bounty hunter. A pilot not on ABC’s announced fall schedule.

It was actually a somewhat busy week, with the series premiere of short-lived sitcom 13 East on NBC and the debut of NBC’s newsmagazine Yesterday, Today & Tomorrow, the return of The Smothers Brothers Comedy Hour on CBS, a new episode of Knight & Daye on NBC, plus three more unsold pilots on ABC and CBS.

That’s it for this issue. Check back next week for my review of the August 5th, 1989 issue of TV Guide. As always, hit the comments with any thoughts or reactions.