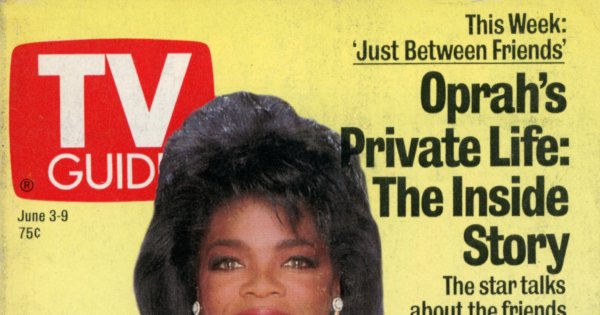 On the Cover: Oprah Winfrey, by Mario Casilli

I didn’t read this week’s cover article. I’m not interested in Oprah’s private life or, more accurately, her private life three decades ago. I also didn’t read the article about “mind games” in the NBA. I did read the profile of Judd Hirsch, even though I haven’t seen any episodes of Dear John, and I’m glad I did because it includes some fascinating quotes about his short-lived detective drama Detective in the House (CBS, 1985).

“The show should have been over five minutes after it started,” Hirsch declares. “It was bad. It was really bad. The production values were terrible. They didn’t pay people well. And I was stuck in it. I deliberately set out to be the worst person I’ve ever met myself. I said, ‘I’m going to do this until they can’t take it anymore and get rid of me’.”

According to co-executive producer Gil Grant, the writing was partly to blame for the show’s failure. But so was Hirsch. “I think he is a brilliant actor. But in being such a perfectionist, he hindered us.”

The article by child psychiatrist Robert Coles, M.D. about how “TV’s tales can aid us in making sense of our own lives” doesn’t include any shocking revelations about how television impacts the mind. He agrees with the usual criticism that too much television, or using television to fall asleep, is probably unhealthy. He praises “first-rate programs” like Masterpiece Theatre and The Wonder Years, which “remind us that television storytelling can also be instructive, even inspiring.”

Would you believe actors and actresses tell little while lies in Hollywood when trying to land a job? Like saying they can dance when they can’t or insisting they know how to ride a motorcycle. Then there are the big lies. Steve Guttenberg apparently walked into Paramount Studios, took over an empty office, and spent several days making phone calls pretending to be an agent until he landed himself the lead role in the short-lived CBS sitcom Billy.

Prices from the Video Cassette Report for movies on VHS: Picasso Trigger ($79.95), Poker Alice ($69.95), Springtime in the Rockies ($19.98). Cheers ‘n’ Jeers criticizes CBS for “disrupting” Wiseguy with too many pre-emptions, praises Nick at Nite for its funny tribute to The Patty Duke Show, laments the “subtle snobbery” of Murphy Brown, and applauds Josh Savino’s performance on The Wonder Years.

Robert MacKenzie believes Gideon Oliver was a good idea taken too far. The main character, played by Louis Gossett Jr., is “too terrific” to be believable. “Gideon Oliver is so many kinds of hero that we don’t know whether he’s going to smile or frown, tell an anecdote or turn over a table. That can be interesting, but it isn’t habit-forming.” MacKenzie praises Gossett’s charm but is critical of the writing.

[TV Guide Plus includes the following categories: In The News and Soap Opera Guide.]

There are four In the News reports this week. The first summarizes a recent Center for Media and Public Affairs survey of network nightly news. The second examines which new fall shows are considered possible hits. The third is about how CBS and CNN were able to cover the Tiananmen Square protests. The fourth reports the death of Gilda Radner.

Three of the eight letters respond to the May 6th 50th anniversary of TV issue. Here they are:

I was appalled when I read “The Moments You Can Never Forget” in your 50th anniversary issue [May 6]. The abrupt cancellation of the Smothers Brothers by CBS should’ve been near the top of the list.
Jackie G.
Scotch Plains, N.J.

The first Kennedy-Nixon debate may have made television “mandatory for an engaged citizen,” but at what cost [“TV That Changed Our Lives,” May 6]? Looks over policies? The people who listened to the debate on radio gave higher marks to Nixon, while the TV audience went for Kennedy. Style vs. substance is still a major political problems. Thanks, TV.
Gerald T. W.
East Aurora, N.Y.

Monday, June 5th, 1989
8PM CBS (2D) (7) LIVE-IN (CC)–Comedy
Danny (Chris Young) insists it’s his charm that prompts his college-age tutor (Wendy Kaplan) to invite him to a party, where he meets her father and his college-age date.
[Postponed from an earlier date.]

Wednesday, June 7th, 1989
8PM CBS (7) (15) HARD TIME ON PLANET EARTH (CC)–Adventure; 60 min.
Realizing the necessity of having money, Control manipulates several ATMs to spew out a small fortune, which Jesse (Martin Kove) shares with a con man before seeing the error of his ways–and winding up in jail. (Repeat)

10PM NBC (13) (35) (4) (4D) (22) (33) DREAM STREET–Drama; 60 min.
Strapped for time, Denis (Dale Midkiff) places the arrangements for Joey’s bachelor party in Harry’s hands. Meanwhile, things are a little shaky for the young lovers: Joni’s last-minute doubts are more than the usual kind; and Marianne (Jo Anderson) gets a job she’s been hoping for–in Cleveland.
[Last show of the series. Next week, “Miami Vice” airs at this time.]

The summer repeat season is in full swing. There’s so little on the networks, TV Guide‘s Close-Ups are mostly for syndicated and PBS programming. There’s even an advertisement opening in theaters.

That’s it for this issue. Check back next week for my review of the June 10th, 1989 issue of TV Guide. As always, hit the comments with any thoughts or reactions.