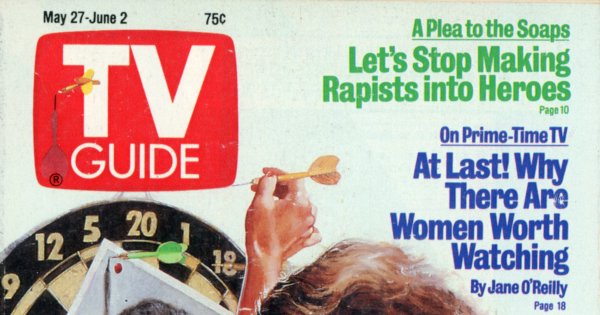 On the Cover: Ted Danson and Kirstie Alley, by John Solie

The cover article is not an article. Instead, it collects various “memos” written by Rebecca Howe, manager of Cheers, to her staff. Although I’ve seen every episode of Cheers and enjoyed watching them, I didn’t bother reading the memos.

I skimmed the article about how soap operas keep turning rapists into heroes. I don’t follows soaps. I think I watched an episode of General Hospital once with my grandmother. Still, it’s disturbing to read how several characters on soap operas like General Hospital and Ryan’s Hope were later embraced by the women they brutalized–and also, it seems, by viewers. “Rape is a violent crime,” Gerard G Waggett declares. “Rapists are dangerous individuals with serious psychological problems. If a soap operas is going to feature a rape storyline, the writers cannot dismiss those facts.”

I also skimmed the article about women on TV worth watching. Although I’ve heard of all the shows mentioned, like China Beach, Murphy Brown, Designing Women, and Roseanne, I’ve never watched any of them.

I skipped the articles about weatherpersons as TV personalities and how the British view American television. There are also profiles of Virginia Madsen, Ed O’Neill, and Victoria Jackson.

Robert MacKenzie devotes most of his review of new NBC daytime soap opera Generations to explaining the premise and characters, leaving little time to actually review the show. “If this series helps expand the options for minority audiences,” he concludes, “more power to it. Since it seems to be to be as torpid and talky as the other serials, I see no reason why it shouldn’t succeed.”

[TV Guide Plus includes the following categories: In The News, On The Grapevine, and Soap Opera Guide.]

There are three In the News reports this week. The first is long report about Harry Reasoner cutting back his role on 60 Minutes due to health issues. Also, NBC will delay the launch of Yesterday, Today & Tomorrow and sportscaster Tim McCarver is near a deal to cover baseball for CBS next season.

On the Grapevine contains four reports. Linda Gray asked Dallas producers not to kill off her character so she can return in the future. Plots for Knots Landing revolve around Karen MacKenzie (played by Michele Lee). Richard Grieco won’t be the traditional private eye on FOX’s upcoming 21 Jump Street spin-off Booker. Head of the Class heads to the Johnson Space Center in Houston to tape an episode for next season.

Five of the eight letters respond to the May 6th 50th anniversary of TV issue. Here are three:

I find it difficult to believe that you never mentioned The Waltons. That show was the catalyst for the health-conscious, back-to-nature trend that began in the early ’70s. The Waltons gave the country permission to be a family again, after the turbulent ’60s, and it lasted for nearly one-fifth of the history of television.
Phyllis O. B.
Grand Rapids, Mich.

Every time TV GUIDE takes a nostalgic look back at past TV programs, The Andy Griffith Show is missing. Please give credit to the wonderful characters of Mayberry.
Gayle S.
Texarkana, Texas.

How could you fail to mention Elizabeth Montgomery and her super supernatural sitcom, Bewitched? Montgomery was Emmy-nominated five times for her role as the “witch with a twitch,” Samantha Stephens. She was the fist female sex symbol of the TV generation.
Herbie J. P.
Santa Monica, Cal.

Sunday, May 28th, 1989
8PM NBC (13) (35) (4) (4D) (22) (33) WALLY AND THE VALENTINES–Comedy
Milquetoast accountant Wally Gills (William Ragsdale) has a surprise in store when he unwillingly takes over his uncle’s talent agency and meets his first clients–the singing Valentine family. A pilot not on NBC’s announced fall schedule.
[“Family Ties” follows.]

Tuesday, May 30th, 1989
8:30PM ABC (24) HAVE FAITH (CC)–Comedy
The jury’s out on whether Father Gabe (Stephen Furst) will venture behind bars to deliver last rites to his pen pal (William Windom) who’s been corresponding from death row.

9:30PM ABC (24) HAVE FAITH (CC)–Comedy
The jury’s out on whether Father Gabe (Stephen Furst) will venture behind bars to deliver last rites to his pen pal (William Windom) who’s been corresponding from death row.

9:30PM ABC (2) (6) (7D) (21) HAVE FAITH (CC)–Comedy
The jury’s out on whether Father Gabe (Stephen Furst) will venture behind bars to deliver last rites to his pen pal (William Windom) who’s been corresponding from death row.
[Time approximate on Ch. 2.]
[Note: Yes, the above listings are what’s printed in the pages of TV Guide.]

Three unsold pilots airing on NBC this week? I didn’t expect that but I guess the network needed to fill the hours somehow. Also, I’m curious why Have Faith is scheduled to air twice on one ABC station. It was probably a mistake of some sort.

That’s it for this issue. Check back next week for my review of the June 3rd, 1989 issue of TV Guide. As always, hit the comments with any thoughts or reactions.