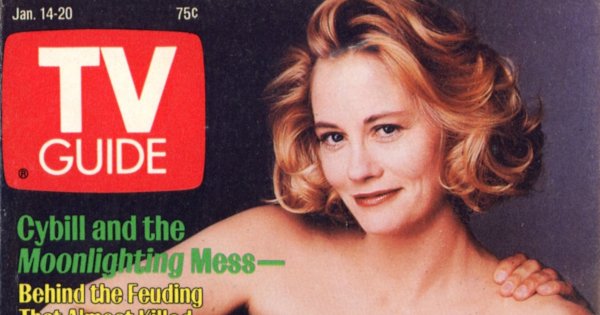 On the Cover: Cybill Shepherd and Bruce Willis of ABC’s Moonlighting

I read three of these articles all the way through and skimmed the others. None are of much interest to me because none of them are about the general state of network television in 1989. “The Moonlighting Mess: Behind the Feuding That Almost Killed the Show” is a he-said-she-said look at the well-documented turmoil on the set of ABC’s Moonlighting, although it’s mostly a she-said because only Cybill Shepherd was willing to go on record. The brief article about celebrities and game shows offers little more than a list of some of the likable, popular, cute, and knowledgeable celebrities who appear on them.

I’m curious how TV Guide ended up publishing an article written by Richard Nixon. In “Memo to President Bush: How to Use TV–and Keep from Being Abused by It,” the former president can’t quite disguise his loathing for the press–and specifically for television news. “Most TV reporters, like most politicians, are conscientious, intelligent and hardworking,” Nixon writes. “The majority are liberal. But because of the media’s loss of credibility in recent years, they are sensitive about appearing biased.” He repeatedly criticizes TV news executives, reporters, and editors, who care more about ratings and power than the truth, seek out negative stories, and “thrive only on conflict and disunity.”

“In short, the media don’t have to be convinced,” Nixon declares. “They have to be outfoxed, outflanked and outperformed. Unless the President finds a way to use them to pursue his own agenda, they will use his failures to pursue theirs.”

The final two articles–one exploring the romance that quickly blossomed between Delta Burke and Gerald McRaney, the other a profile of athlete Richmond Flowers Jr.–are harmless.

Lawrence Eisenberg’s Grapevine includes tidbits about Blair Brown’s feelings about life as a single woman in New York City, Josh Taylor’s dream of starring in a Western, Dan Schenider’s thoughts on how every sitcom is derivative of I Love Lucy and The Honeymooners, Esther Rolle’s concerns about how most TV shows featuring African-Americans are comedies, and more. Alan Carter shares stories about Kate Collins, Joe Marinelli, and Jerry Douglas in Soaps. Mel Durslag’s Sports View examines pro football quarterbacks who run with the ball.

Prices from the Video Cassette Report for movies on VHS: The Great Outdoors ($89.95), Kansas ($89.95), The Light at the Edge of the World ($69.95), The Thin Blue Line ($89.99). Cheers ‘n’ Jeers praises Dixie Carter’s liberal speeches on Designing Women, applauds classy Diana Muldaur for her role on Star Trek: The Next Generation, boos the a mistake in a 1988 Head of the Class wall calendar, and scoffs at Entertainment Tonight for spending so much time focusing on Mary Hart’s legs.

Merrill Panitt reviews the CBS made-for-TV movie Unconquered, which he calls “solid, inspiring entertainment.” It tells the story of Richmond Flowers Jr. (played by Dermot Mulroney) who faces a variety of hurdles–flat feet, asthma, fallout from his politician father’s support for the Civil Rights movement–in his quest to become a successful athlete. Panitt praises the cast, which also includes Peter Coyote and Tess Harper, while criticizing how the movie “presents some Southerners as outright caricatures.” The review is otherwise very positive:

Those quibbles aside, “Unconquered” succeeds in showing a side of the civil-rights struggle we rarely see–the scarifies endured by the families of white activists in the South. The activists, we come to realize, were not only masters of their own fate but were responsible for what happened to their families.

That story, told simply but movingly, is what makes “Unconquered” an outstanding television movie. What starts as just another disease-of-the-week docudrama soon turns into a provocative, stimulating and exceptionally fine television drama.

There are four In the News reports this week. The Disney Channel is working on a new version of The Mickey Mouse Show. Steven Spielberg is planning a new animated series called Tiny Tunes for syndication. NBC has three Tom Brokaw specials and a Maria Shriver documentary in production. Finally, there is the possibility that AFTRA contract talks affecting non-prime-time programming.

On the Grapevine contains three reports this week, including news that Bob Hope will guest start on The Golden Girls in February. Meanwhile, Sherman Hemsley wants his pet alligator, Theodore, to guest star on Amen.

According to The Ratings Race, “The Karen Carpenter Story” averaged a 26.3/41 Nielsen rating/share when it aired on CBS on January 1st. That made it the number one show of the week, the top-rated TV movie of the season, and the fifth highest-rated program overall of the season. NBC’s Unsolved Mysteries has averaged a 16.1/26 during the first 15 weeks of the season, drawing older viewers away from The Van Dyke Show and Annie McGuire on CBS.

Two of the seven letters in this issue praise Betty White, in response to an article in the December 17th, 1988 issue of TV Guide:

In her article about Golden Girl Betty White, Carolyn See goes out of her way to find someone who will say a bad word about Betty, then intimates that those asked were afraid to badmouth her because of the “power” she supposedly wields [“Why No One Will Knock Betty White,” Dec. 17]. Can’t See just accept the fact that maybe people like Betty?
Barbara C.
Culver City, Cal.

I was lucky enough to attend a Dec. 16 taping of The Golden Girls. White was the first to acknowledge the audience with a smile. Her “power” is her charm, her twinkling eyes and her love of animals. The interviewer’s cheap shots cut to my heart.
Georgianna C.
Santa Ana, Cal.

Here’s the Channel Directory for the San Francisco Metropolitan Edition of TV Guide:

10:00PM CBS (5) (46)
West 57th (CC); 60 min.
Scheduled: A report recalling the 1964 Mississippi murders of civil-rights worker James Chaney, Andrew Goodman and Michael Schwerner (the investigation of these killings is the subject of the film “Mississippi Burning”). Also: a profile of director John Waters; and a segment on Miami personal-injury lawyer J.B. Spence (postponed from an earlier date). Correspondents include Steve Kroft.

Thursday, January 19th, 1989
8:00PM ABC ABC (7) (11) (13)
Knightwatch (CC)–Crime Drama; 60 min.
Conclusion. Most of the Knights want to retaliate against the police after Calvin’s brutal beating by an officer; Burn and Jake (Clavin Levels, Samantha Manthis) have a run-in with the imposter Knights; Casey and Kurt (Ava Haddad, Tim Guinee) begin to share more than just art appreciation; and Calvin and Leslie (Don Franklin, Paris Vaugh) reach the crisis stage in their relationship.
[Last show of the series. Next week, “A Fine Romance” airs here.]

That’s it for this issue. Check back next week for my review of the January 21st, 1989 issue of TV Guide. As always, hit the comments with any comments or suggestions.