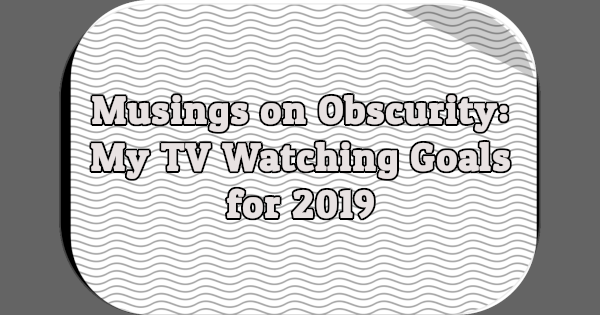 Last January, I published a blog post in which I discussed my TV watching goals for 2018. At the top of the list? I wanted to finish the second season of The Life and Times of Grizzly Adams. I also wanted to watch the eight episodes of Mr. Lucky I hadn’t seen. And I hoped to find time to start watching Man from Atlantis.

I did finish the second season of The Life and Times of Grizzly Adams. Rather than watch just the eight episodes of Mr. Lucky I hadn’t seen, I decided to watch the entire series, all 34 episodes, from start to finish. But I wasn’t able to get through all of Man From Atlantis. I struggled through the four pilot telefilms over the course of three months.

What else did I watch last year? Let’s see. I watched 11 episodes of United States Steel Hour, which wasn’t planned. Nor had I planned on watching the first season of The Rebel but when I saw it on Amazon Prime, I decided to watch it. The same goes for one season wonder Decoy.

Then there’s Us & Them, the unaired FOX sitcom from 2006. It started streaming on Sony Crackle in October so of course I had to check it out. There are only seven episodes. I watched one a week for seven weeks.

It’s not an obscurity, but I found the time during 2018 to watch a few dozen episodes of Welcome Back, Kotter. I’ve a fan of the show but not a big enough fan to own it on DVD. I’ve watched it sporadically over the past decade, whenever it happened to be on TV. I can now say I’ve seen all 94 episodes. I also rewatched recent short-lived NBC sitcom Great News on Netflix. It ran for 23 episodes over the course of two short seasons from 2017 to 2018. I’m still bummed about it getting cancelled.

I’m taking a little bit of a break from watching obscure and forgotten TV shows. Once I’m ready to dive back in, my first goal is to get through the 13 episodes of Man from Atlantis. Then I’ll move on to the 13 episodes of Coronet Blue.

After that, I don’t know what I’ll watch. If Amazon Prime starts streaming the second season of The Rebel at some point during 2019, I’ll find time to watch. Otherwise, I’m keeping my options open. I’ve mentioned a few times that I’m not currently purchasing TV shows on DVD–and haven’t for several years. I’m only able to watch Man from Atlantis and Coronet Blue because family members bought me the DVD sets as gifts.

If I do decide to lift my self-imposed moratorium on new DVD purchases, there are so many options: The Loner, The Immortal, Hank, SEARCH, The Magician, Dan August, Mr. Novak (Season 1), Blondie (1957), Lucan. The list goes on and on.

Of course, if I don’t confine myself to TV shows available on DVD, my viewing options are endless. Both the Internet Archive and YouTube offer thousands of episodes of hundreds of TV shows, many of them short-lived and/or forgotten. I can stream YouTube to my TV, although poor quality YouTube videos won’t look very nice.

Finally, at some point this year I’ll be watching the Lucas Tanner pilot telefilm and two episodes of the 1974-1975 weekly series, to prepare for writing either an article or a spotlight about the show.

What are your TV watching goals for 2019? Will you be enjoying any obscure TV shows this year? Hit the comments with your thoughts.

6 Replies to “Musings on Obscurity: My TV Watching Goals for 2019”