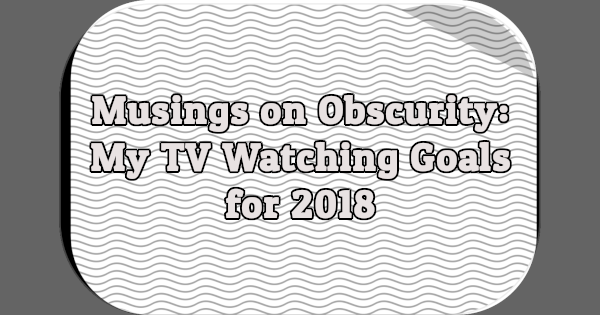 Contrary to what you might expect, I don’t watch much old or “classic” television. I do watch a lot of TV but it’s almost all current network fare. I’ve been trying to increase the amount of classic television I watch, with a heavy focus on short-lived TV shows or shows I’ve written about here at Television Obscurities. For example, between September 2015 and January 2016, I watched It’s About Time and My Mother the Car on Antenna TV.

I’m not a big fan of resolutions but I’m fine with setting goals I may not be able to keep. Here’s a brief look at my TV watching goals for 2018.

I’ve been living under a self-imposed moratorium on buying TV shows on DVD for several years. Why? I need to finish the TV shows I already own on DVD before I buy more. Last year, I finally finished watching The Girl from U.N.C.L.E.–more than five years after I started. Next up? Finishing Season 2 of The Life and Times of Grizzly Adams. It took me over a year to watch Season 1, which only includes 13 episodes. I’m roughly halfway through Season 2. So far, I’ve watched two episodes in 2018.

After The Life and Times of Grizzly Adams, I’m planning to watch the eight episodes of Mr. Lucky I haven’t seen. I watched most of the series on DVD in 2013 but didn’t finish. Then comes Man from Atlantis. I only own the TV series, so I’ll need to buy the pilot telefilms on DVD.

Once I’m done with Man from Atlantis, I may rewatch Planet of the Apes. It’s been close to a decade since my last viewing.

If I manage to get through all these shows, perhaps I’ll decide to lift my moratorium on buying DVDs. The question then becomes which TV shows do I buy and watch next? There are so many options: Coronet Blue, The Immortal, Hank, Honey West, The Rebel, SEARCH, The Loner, The Magician. The list goes on and on.

Some Newer Shows, Too

Newer obscurities are on my radar for 2018, too. A family member who supports my obsession with short-lived TV gave me Surface (NBC, 2005-2006) on DVD for Christmas. I was a huge fan of the series. I hope it holds up. If it does, I may buy Threshold (CBS, 2005) on DVD. It’s another show I enjoyed during its brief run–and I’ve never seen the unaired episodes.

Streaming is, of course, another option. Particularly for recent TV shows. I subscribe to both Netflix and Amazon Prime Video. Every so often I check to see if either service has added any one season wonders from the past few years that I’ve yet to see. Usually, the pickings are slim.

Do you have any TV watching goals for 2018? Hit the comments with your thoughts.