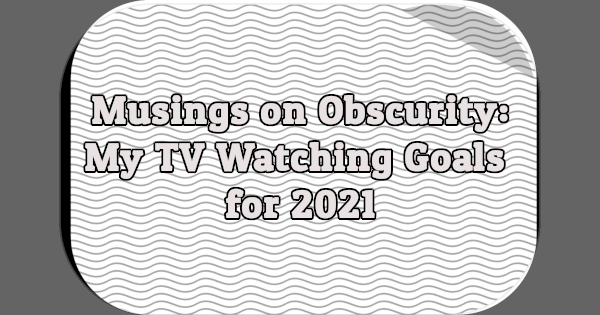 I’m later than usual with my annual post about my plans for watching television in the new year. The first month of 2021 is already over but I’ve made considerable progress.

What did I accomplish last year? I did watch all 40 episodes of The Rebel Season 2 plus the first 24 episodes of Blondie. I think I got through about a half dozen episodes of Surface during the last few weeks of 2020. I also sampled two episodes of one season wonder On Our Own (CBS, 1977-1978) on Amazon Prime but didn’t enjoy the show enough to keep watching. And I stumbled upon the animated Spider-Woman (ABC, 1979-1980) on Disney Plus and watched all 16 episodes.

However, I didn’t get the chance to start watching either Coronet Blue or The Immortal.

Why? Because I got sidetracked by other TV shows. I rewatched 30 Rock and Star Trek: The Next Generation last year. That ate up a big chunk of time. I watched a lot of The Great British Baking Show on Netflix.

Also, I rewatched recent obscurity Perfect Couples (NBC, 2010-2011) which isn’t streaming or on DVD but is available as a digital download. It’s the only digital download I’ve paid for but I loved the show when it originally aired. It was just as hilarious watching it again a decade later.

So far in 2021, I’ve finished watching Surface and started the final disc of Blondie. I also discovered a handful of episodes of Accidental Family (NBC, 1967-1968) on YouTube and watched four of them so far. It’s too bad the entire series isn’t available.

Next on my list is, of course, Coronet Blue. I’ve owned it on DVD for years and just haven’t found the time to watch it. After that, I’ll watch The Immortal. Or at least that’s the plan. With so many streaming services, plus YouTube and the Internet Archive, there’s always the potential I’ll get sidetracked once again.

What do you plan on watching in 2021? Do you have any TV watching goals? Hit the comments with your thoughts.