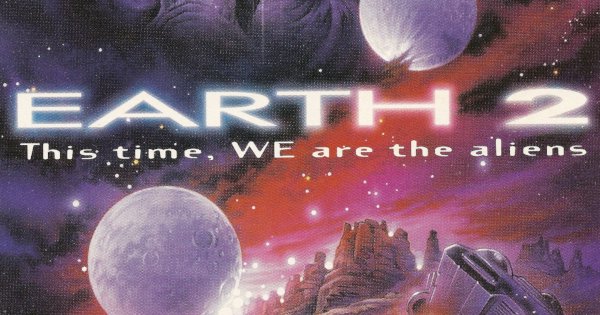 Twenty years ago tonight, NBC premiered a new sci-fi drama called Earth 2 that changed my life. I doubt many people can say that. What better way to kick off my new Musings On Obscurity column than with a look back at a one season wonder from the 1994-1995 season and how its cancellation laid the foundation for Television Obscurities.

Earth 2 debuted with a two-hour pilot movie that ran from 7-9PM on Sunday, November 6th, 1994. I was in elementary school at the time and it was probably the first adult show I watched (rather than shows aimed at kids or older shows like Star Trek or Batman that I watched in repeats). I remember being so excited about it. It was appointment viewing for most of the family. This was back when we only had one TV set so unfortunately if you didn’t want to watch Earth 2 you weren’t watching anything at 7PM on Sundays. 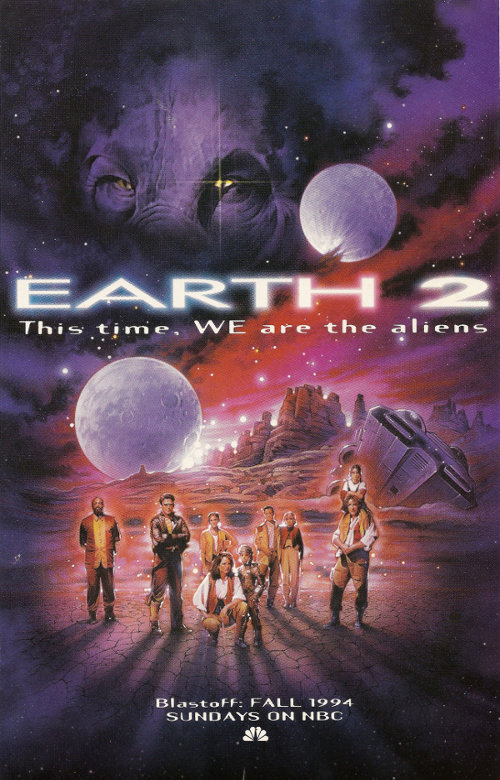 Advertisement for Earth 2, Circa October 1994

For those not familiar with the show, Earth 2 was set in 2192 and starred Debrah Farentino as Devon Adair, the leader of a group attempting to colonize a planet 22 light years from Earth called G889. Most of humanity lived in space stations, the Earth’s surface having become nearly inhospitable. Her son, like many children, was sick with a mysterious illness called the Syndrome that was caused by living in space. Devon was convinced that life on G889 would cure him. The government thought otherwise and tried to sabotage the Eden Project, forcing it to launch ahead of schedule.

Upon reaching G889, Devon and a small advance group of colonists crash land on the planet, far from the proposed site of New Pacifica. The show chronicled their adventures as they attempted to reach the colony site. As a kid, I doubt I cared much about the political intrigue, social themes, or romantic subplots. I was more interested in the various creatures and critters native to G889, the robot named Zero, the virtual reality sequences, the cool flashlights, weapons, and all the other sci-fi gadgetry. A few years ago, I contemplated bidding on one of the futuristic rifle props from the series when it popped up on eBay. It’s probably best I didn’t because I would have nowhere to display it.

The Fickle Business of Television

Although it premiered to high ratings, the series had a rough time slot and the late premiere didn’t help. NBC did the series no favors by pre-empting it an astounding nine times between January and May 1995 and occasionally moving its time slot. The season finale aired on May 21st followed by two episodes aired out of order. And that was that.

I loved Earth 2 and its cancellation after just a single season left a lasting impression on me. It introduced me to the cruel reality of television at a very young age, which I’m sure contributed to my interest in short-lived and obscure television. It seemed so unfair that a show I loved so much could just end because not enough other people watched it.

I recorded the theme song to Earth 2 on cassette tape. It was all I had left of the series after it went off the air. I remember being so excited a few years later when I was on vacation with my family and found

[April 12th, 2016 Update: My recollection was off. I found a copy of one of the original novels in the bookstore while on vacation, not the novelization of the pilot. I later bought all three Earth 2 novels on eBay.]

In January 1998, Sci Fi Channel began airing Earth 2. My family didn’t get Sci Fi Channel at that time but a relative did and taped two episodes for me at some point around 2000. I must have watched them over and over again. The complete series was released on DVD in July 2005, less than a decade after it was cancelled. All things considered, ten years wasn’t too long to wait to be able to enjoy Earth 2 again.

I wasn’t aware back in 1994 and 1995 that there was a very active fanbase for Earth 2, one that used the nascent World Wide Web to interact and organize. A Usenet group was launched in January 1995 where fans could discuss episodes, share news, and even distribute a newsletter. A fan club was organized. A group of Earth 2 fans paid to run an advertisement in Daily Variety in support of the series and even flew a banner over the building where the 1995 Emmy Awards were being held to draw attention to their campaign to get it renewed. Fans also organized their own Earth 2 conventions, the first of which (New PacifiCon ’96) drew more than a dozen members of the cast and crew to New Mexico in April 1996. You can read about some of the conventions here.

There used to be a lot of websites dedicated to the series but many have disappeared over the years or stopped updating. One defunct Earth 2 website even had the horrendous presentation video put together by Universal Television to try to sell a second season of the series to UPN. I believe it was first shown at New PacifiCon ’96. Had this proposed second season been made, it would have been a very different show, one most fans wouldn’t have recognized. I think I still have a copy of that video somewhere. Additional information about the abortive second season can be found here.

It’s too bad Earth 2 was cancelled after its first season. But that cancellation taught me a tough lesson about television. Even if I didn’t know it then, that lesson would shape my life both personally and professionally. Earth 2 is one of the reasons Television Obscurities exists. Not everyone watched Earth 2 and not everyone who did loved it as much as I did (and there were plenty of people who loved it even more than me). But everyone has a show like Earth 2 that they were passionate about, that they really missed when it went off the air. I’ll always remember Earth 2 and the memories of watching it with my parents. Luckily it’s on DVD and Netflix, so I can watch it anytime I want.