With the 1964 Presidential Election over, TV Guide was able to get back to talking about television. There’s something for everyone in this issue: an article about Nielsen ratings co-written by none other than A.C. Nielsen, Jr. himself; a picture feature focusing on actress Leslie Caron; a brief look at a closed-circuit TV system used by the housemother at a college dorm for girls; a peek behind the scenes of Dr. Kildare‘s not-so-Italian trilogy; and even a recipe for cioppino (whatever that is).

“Nielsen Defends His Ratings” is unfortunately not as insightful as I had hoped. The article is little more than a puff piece yet it remains just as mildly relevant today as it was fifty years ago. Consider the follow passage:

Those who would castigate commercial television, incidentally, should remember that it is wholly supported by advertising revenues. Advertising can be effective only if it reaches people. That is why sponsors want programs that attract the largest audiences containing the kinds of people who might buy their products. Whether we like it or not, weighty cultural, educational or artistic shows seldom attract large audiences.

Household ratings and overall audience shares were the most important back in 1964. Today, TV shows live and die by demographics. A huge audience doesn’t mean anything if most of the viewers watching are outside the adults 18-40 demo. But the general theme remains true today: advertisers want specific types of viewers and as many of them as they can get.

Nielsen and co-author Theodore Berland give a general defense of statistical sampling, describe how the Nielsen Audimeter device works, and try to explain why 1,100 homes are sufficient to represent the 52 million television households in the country. They admit that ratings could be more accurate but insist that their clients would never pay the huge costs associated with increasing the sample size four times to cut the error rate in half. “TV ratings are a tool designed for a specific job,” concludes Nielsen. “With their limitations kept firmly in mind, their users get from them valuable and highly useful information otherwise unavailable.” 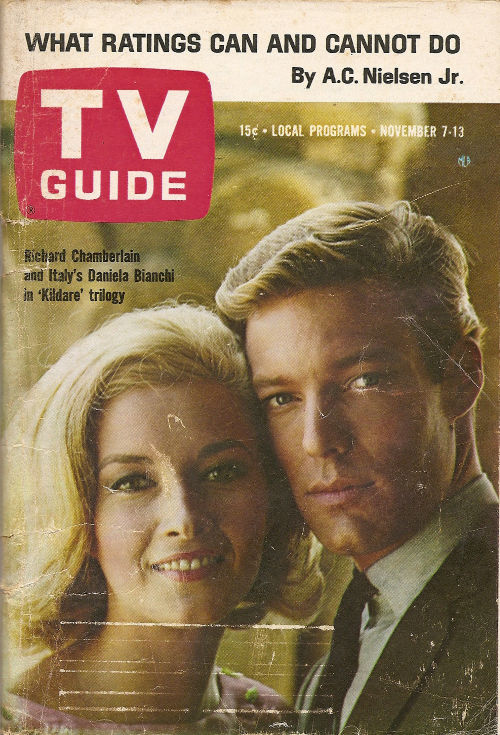 There are three other articles in this issue. “A Boy Who’s Doing A Man’s Job” looks at 16-year-old Wagon Train co-star Michael Burns, said to be one of the most mature and professional youngsters in the business. Of particular interest to me is the brief discussion of It’s a Man’s World, the short-lived NBC series Burns co-starred in prior to Wagon Train. He was furious when It’s a Man’s World was cancelled and didn’t understand why his mother wouldn’t let him join co-stars Ted Bessell and Randy Boone as they drove across country to rally support for the series but eventually came to terms with his disappointment.

“She’s the Sweetheart of Banks, Bakeries and Paint Plants” is a two-page article about jingle singer Laura Greene, who left her job at a telephone company to sing for commercials full-time. She reportedly made $50,000 a year singing for banks, utility companies, the Yellow Pages, and cosmetics companies. None are identified by name, however. “Wanted: 100 Skinny Indians” examines the role of casting departments in the television industry. Any sort of role called for in a script can be filled. An unnamed actor claims to have played 250 sheriffs on television. Another actor, missing a leg, has made a living as a stuntman who can realistically portray a character getting his leg torn off.

There are three picture features in this article. My favorite examines the closed-circuit TV system installed in the new dormitory for girls at Monmouth College in New Jersey. The housemother had a massive piece of equipment in her apartment connected to a camera in the lobby. Whenever a coed buzzed in, the housemother could see if she was alone and ensure that no boys got inside. The camera had to be mounted to the wall to keep the boys from moving it or fiddling with the focus and it took some time for the coeds to get used to the camera and stop crowding into the housemother’s apartment to watch one another on screen. Gosh, the 1960s must have been so much fun. 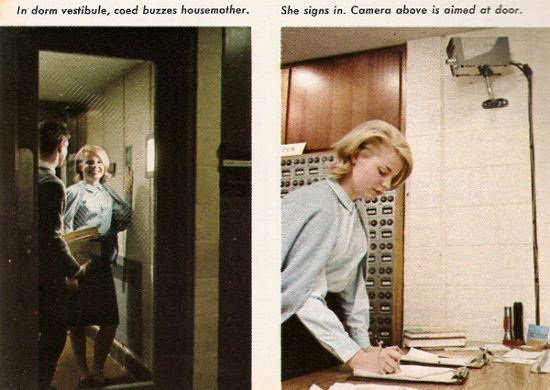 Another picture feature highlights Leslie Caron’s various roles in “An Hour with Robert Goulet,” a CBS special to air November 19th. The third is a behind-the-scenes look at “Rome Will Never Leave You,” the three-part Dr. Kildare trilogy to air later in November. Because Richard Chamberlin was filming Joy to the Morning he wasn’t available to travel to Rome. So, Rome was built at the MGM Studios in Culver City using sets from Romeo and Juliet (1936) and The Swan (1956), among others. The trilogy co-starred Italian actress Daniela Bianchi, who played a Bond girl in 1963’s From Russia with Love. She spoke very little English in 1964, hated Los Angeles driving, and thought Americans weren’t nearly as friendly as they seemed.

This issue’s “As We See It” editorial tied into the Nielsen article, with the editors explaining that they too had questioned how Nielsen’s sample size of just 1,100 households could be accurate. But after the FCC’s investigation and a similar House Subcommittee investigation, Nielsen replaced its entire sample in two years and the television industry joined together to create a ratings council. That seemed to placate TV Guide to some degree: “It is remarkable how promptly and efficiently the broadcasting industry acted to improve and protect ratings. It would, however, be of more value to viewers if the industry could organize as promptly and efficiently to improve programming.”

Also in the national section this week was Cleveland Amory’s review of Kentucky Jones starring Dennis Weaver. He wasn’t enthusiastic about the new NBC series in which Weaver played a widowed horse trainer raising a 10-year-old Chinese orphan named Dwight Eisenhower Wong (played by Rickey Der). Amory thought Ike, as the youngster was known, was best in small doses. “Mr. Weaver is a fine actor,” declared Amory, “and this could be a fine show; but so far, apparently because of its scriptwriters’ love for heavy symbolism, it has not lived up to its high promise.”

There were a lot of good tidbits in the Hollywood and New York TV Teletype columns this issue:

The letters page this issue saw to readers writing in to criticize Cleveland Amory for saying Bewitched was based on Noel Coward’s Blithe Spirit (from his October 24th review). One insisted the sitcom was based on a Veronica Lake movie called I Married a Witch (itself loosely based on a Thorne Smith novel called The Passionate Witch. The other letter claimed the series was based on John Dickson Carr’s novel Burn, Fire, Burn, which had been adapted for television by The Kraft Mystery Theatre with Barbara Bel Geddes. Here’s the TV Guide response:

According to Screen Gems, the show’s producer, Bewitched is based on an original idea by studio executives Harry Ackerman and William Dozier. The studio disclaims any derivation from any previous play, movie or TV series.

Two letters were critical of the new direction taken by Lassie at the start of the 1964-1965 season, chronicled in the October 17th issue of TV Guide. Another praised an episode of The Hallmark Hall of Fame (“The Fantastiks,” aired October 18th) while others called The Man from U.N.L.C.E. and My Living Doll the best new shows of the season.

The first thing I noticed about the listings section in this issue is that it is chock full of advertisements, both local and national. Nearly every other page has an advertisement of some sort. A few have two ads. There are lots of local ads for movies. There are half-page ads, quarter-page ads, even some eighth-page ads. ABC bought five full-page ads for its weeknight line-ups. There’s also a full-page ad for NBC’s Bell Telephone Hour tribute to Oscar Hammerstein II hosted by Henry Fonda. There’s even an ad for Connecticut’s WHCT-TV (Channel 18) and its subscription TV presentation of The Night of the Iguana. 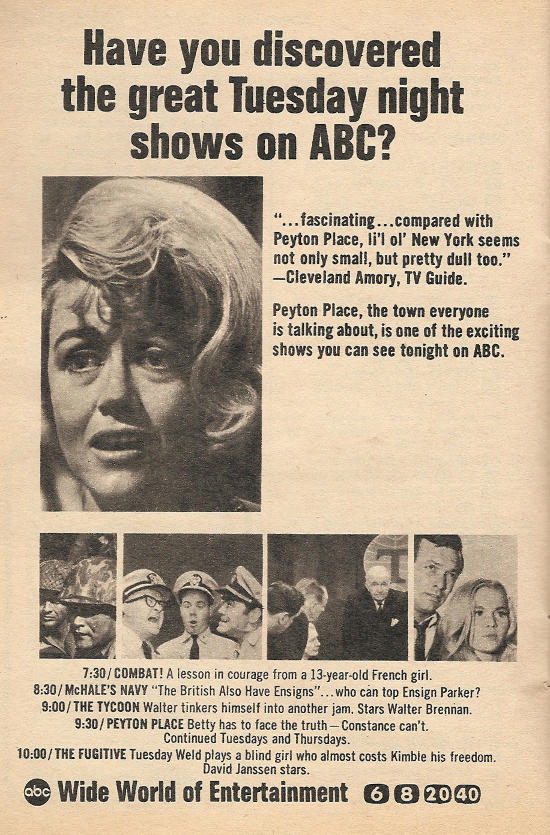 I also noticed that quite a few network shows were pre-empted this week for local programming. Actually, after looking at a few earlier issues, it looks like WJAR-TV (Channel 10), the NBC affiliate in Providence, RI, regularly pre-empted all three sitcoms that made up 90 Bristol Court on Mondays in order to air movies. The sitcoms aired instead on Saturdays from 6-7:30PM. Connecticut’s CBS affiliate, WTIC-TV (Channel 3), premiered the syndicated documentary series Decision: The Conflicts of Harry S. Truman on Thursday, November 12th at 9:30PM, pre-empting The Baileys of Balboa. As far as I can tell, the sitcom wasn’t aired at a later date, meaning Connecticut viewers could only watch it if they happened to get another CBS station. WTIC-TV also pre-empted Slattery’s People on Mondays at 10PM in order to show repeats of Richard Diamond, Private Detective. Again, it doesn’t look like the series aired at a later date.

WHDHD-TV (Channel 5), the CBS affiliate in Boston, began airing Decision: The Conflicts of Harry S. Truman on Tuesday, November 10th at 7:30PM, pre-empting World War I. It also does not appear to have been aired at a later date. WHDH-TV also pre-empted Gilligan’s Island and Mr. Broadway from 7:30-9PM on Saturday nights in favor of movies. The station did air Gunsmoke at 10PM, however. Episodes of Mr. Broadway were aired the following Saturday at 6PM. Once again,it doesn’t look like the station aired Gilligan’s Island at a later date. I could be wrong, though.

There were two big premieres this week. First, CBS debuted Profiles in Courage at 6:30PM on Sunday, November 8th. The documentary series was based on the late President Kennedy’s book of the same name. The first episode, focusing on Senator Oscar W. Underwood, received a TV Guide close-up. The other premiere was ABC’s late-night The Les Crane Show, which had been given a trial run in August. It aired from 11:15PM to 1AM on many stations but WNHC-TV (Channel 8) aired it from 11:30PM to 1:15AM. Both WNHC-TV and WHYN-TV took out half-page ads for the premiere.

Ad for the Premiere of Profiles in Courage – Copyright 1964 Triangle Publications, Inc.

I didn’t come across any noteworthy local programs but Springfield’s WWLP (Channel 22) ran an advertisement for its local series At Home with Kitty, aired weekdays at 1PM: 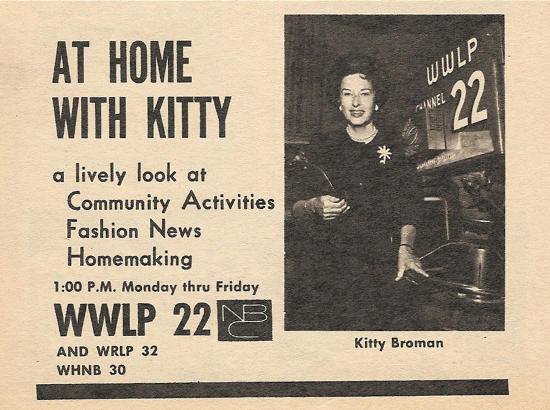