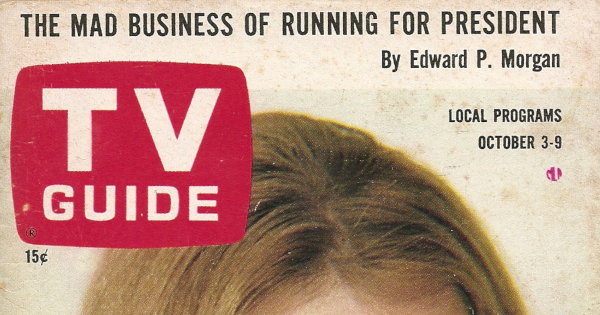 This was a pretty packed week for television but you wouldn’t really know it from any of the articles in TV Guide. Of the four articles in this issue only one — a brief look at actress Ma Farrow, star of ABC’s new twice-weekly Peyton Place — relates in any way to programming then on the air and even if has little to do with the show. There’s another article about another actress (Jill St. John), a brief piece on open auditions held by CBS, and an essay on the history and future of U.S. Presidential campaigns.

Both the article on Farrow and the one on St. John focus mostly on their personal lives: St. John’s marriages and Farrow’s famous parents as well as her friendships with older folks like Salvador Dali. She apparently didn’t have any friends her own age in 1964. The article about the CBS open auditions states that Carol Burnett, Don Knotts, and George Gobel were all discovered at the auditions, which started in 1949, while Jonathan Winters, Carol Lawrence, and Andy Griffith were skipped over. 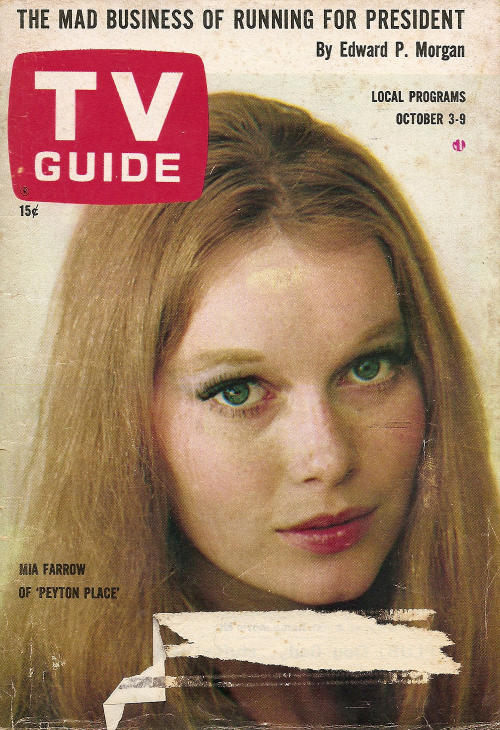 Edward P. Morgan’s four-page article “It’s A Mad, Mad, Mad, Mad Business” examines the modern presidential election. Morgan, an ABC News analyst, worries that the rising costs of campaigning means only the rich can afford to run for the Oval Office. Most intriguing is his discussion of the role of computers on elections and worries that computer projections made after polls close on the East Coast could impact voting on the West Coast.

He notes that on election night in 1960, a TV network’s computer projected that Kennedy would win in a landslide, causing President Eisenhower to appear live on television urging voters in California to vote and “keep fighting right to the last minute.” I’d certainly love to see footage of that. It seem at best inappropriate but I suppose since Eisenhower wasn’t a candidate it wouldn’t have run afoul of the FCC’s equal-time rule.

None of these articles offer much in the way of research value but for readers in October 1964 both the Farrow and presidential campaign articles were timely and probably somewhat informative.

The “As We See It” editorial this issue is amusing only because it manages to use the phrase “goof balls” three times, all seriously. It praises a recent CBS News report on the sale of amphetamines and barbiturates. CBS News producer Jay McMullen acquired “more than a million pep pills and goof balls” worth between $250,000 and $500,000 by having fake stationary made up and ordering drugs from pharmaceutical companies.

Getting all those pills apparently cost him just $600 to get all those pills. The CBS News coverage came just as legislation was being discussed in the House. “The network performed a constructive service by exposing an evil,” said TV Guide, “which certainly is as important an area of journalism as reporting the news.” The report in question was broadcast on September 2nd, 1964 on The CBS Evening News with Walter Cronkite.

Tidbits from the Hollywood and New York TV Teletype columns:

There are four bits of news in the “For the Record” column in the listings section this week:

The Letters page, also in the listings section, includes five letters about the new fall TV season. One is opposed to all the comedy, two praise The Addams Family and Bewitched, and the others are critical of Peyton Place (“In my opinion, we have enough sudsy tear-jerkers during the day without clogging up prime evening viewing with them”) and Shindig. Another letter thanks TV Guide for its 1964 TV Set Buyers’ Guide.

One letter from a high school student reports that a poll of modern-history teachers in the Kansas City area found 17 out of 20 teachers consider Walter Cronkite the best presenter of daily news. Two preferred Huntley-Brinkley and one didn’t really care.

As I said, this was a big week for television, and not just because 90 Bristol Court premiered on Monday, October 5th. I may be a fan of that series, but it wasn’t very successful. The 90-minute sitcom block was the last new show of the season to debut. Set at an apartment complex in California, it included three half-hour sitcoms: Karen, with Debbie Watson; Tom, Dick and Mary with Don Galloway, Joyce Bulifant, and Steve Franken; and Harris Against the World, with Jack Klugman. Appearing in all three sitcoms was Gus Raymond as a handyman. 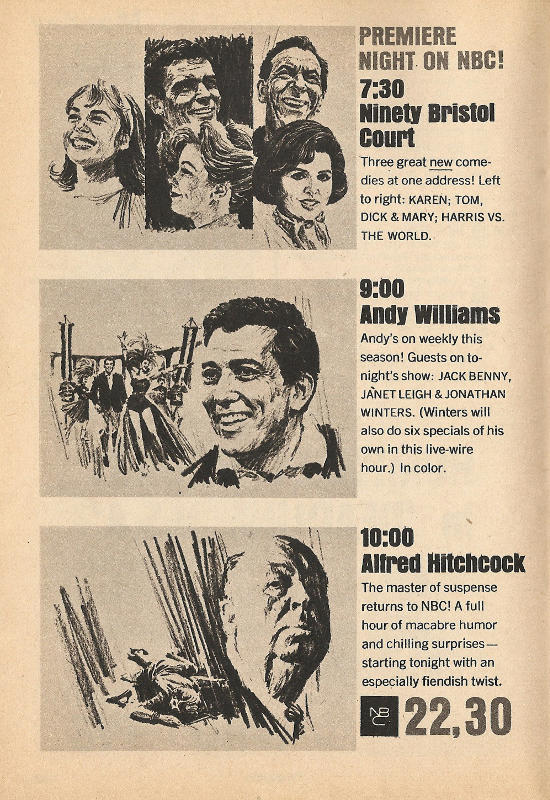 Karen survived for the entire 1964-1965 season. Tom, Dick and Mary and Harris Against the World weren’t so lucky, ending in January 1965. You can read all about the series here. Also premiering on Monday, October 5th was daytime soap opera The Young Marrieds on ABC, which aired Monday through Friday from 3:30-4PM.

Far more important than 90 Bristol Court was the broadcast of See How They Run on Wednesday, October 7th. An installment of Wednesday Night at the Movies on NBC, it is considered the very first made-for-TV movie. TV Guide notes “this movie is part of the ‘project 120’ series of feature films that will be distributed abroad after their TV premieres here.” 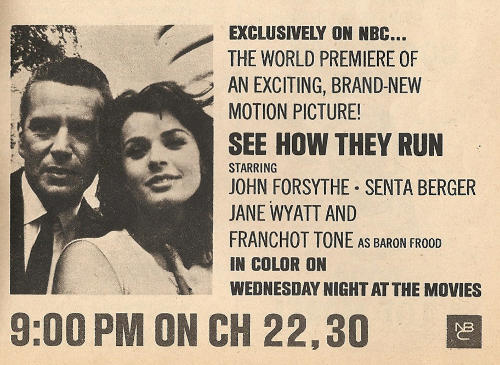 Viewers at the time didn’t realize that within a few years there would be more made-for-TV movies than anyone could possibly watch. See How They Run starred John Forsythe, Senta Berger, and Jane Wyatt. Also in the cast was Leslie Nielsen.

Perhaps even more important than the very first telefilm was the start of the 1964 World Series on NBC, also airing on Wednesday, October 7th. I mentioned in last week’s installment that I’m not a sports person so it shouldn’t come as a surprise to anyone that I’m only vaguely familiar with how the World Series works. Because TV Guide was published before the deciding regular season games, there was no way to know who exactly would be playing in Game 1 of the series.

The TV Guide Close-Up was pretty sure the Philadelphia Phillies would be involved, unless they “went into a tailspin in the final week of the season.” Apparently they did. The Phillies didn’t make it to the World Series in 1964. Instead, the New York Yankees faced the St. Louis Cardinals. Game 2 was played on Thursday, October 8th as planned.

Another noteworthy sporting event kicked off this week: the 1964 Summer Olympics in Tokyo. A live two-hour broadcast of the opening ceremonies, courtesy of the Syncom III satellite, aired on NBC from 1-3AM on Saturday, October 10th but was included in the TV listings for Friday, October 9th. I have to wonder how many people actually stayed up to watch the opening ceremonies.

As if that wasn’t enough, the week also included the return of The Bell Telephone Hour with Bing Crosby on NBC (Tuesday, October 6th) and The Beatles on Shindig on ABC (Wednesday, October 7th). Plus the premiere of Underdog on Saturday, October 3rd on NBC.

Here are all TV Guide close-ups for the week:

Locally, this week saw the return of Dance Party on WTIC-TV (Channel 3), Connecticut’s CBS affiliate. Hosted by Brad Davis, the half-hour series aired Saturday at 5:30PM. Guests included Gene Pitney and the McGowman Brothers with Doug Lapham (a folk group). As I get more familiar with the listings each week I’m discovering more and more local shows, like The Barbara Bernard Show, which ran from 1:05-1:30PM Monday through Friday on WHYN-TV (Channel 40) out of Springfield, MA.

There are local advertisements for Sports View with Carl Grande on WNHC-TV (Channel 8) in Connecticut, which ran from 11:25-11:30PM Monday through Friday as well as Newsire on WNHC-TV with Stelio Salmona. Unfortunately, somebody tore out most of that second ad so I’m not sure exactly when the news reports airs. Neither Sports View or Newswire are included in the TV listings by name.