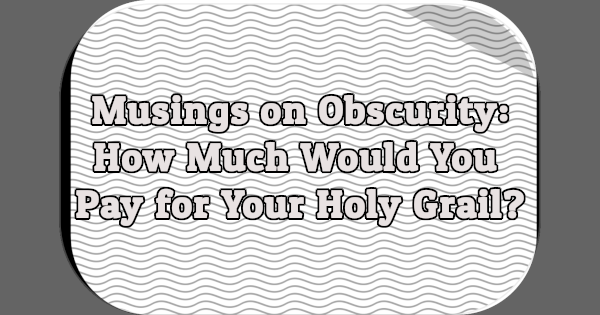 [NOTE: A placeholder for this column accidentally went live yesterday. I apologize for the error.]

I’m sure I’m not the only person who dreams about certain TV shows being released on DVD or, with physical media on the decline, being added to a streaming service like Netflix or Warner Archive Instant. At the top of my list is The New People. The short-lived ABC drama, which ran for 17 episodes during the 1969-1970 season, is my Holy Grail of television.

Over the years, I’ve given some thought to how much money I’m willing to spend to own The New People on DVD. I think I’ll be okay with shelling out around $100. That might seem like a lot for just 17 episodes. It comes out to almost $6 per episode. Also, recall that The New People ran in a 45-minute time slot. The episodes should clock in at roughly 38 minutes without commercials. That adds up to around 10.5 hours of content.

Last year, Shout! Factory released the first season of The Defenders on DVD with a suggested retail price of $44.99. That’s around $1.40 for each of the 32 episodes. At around 50 minutes each, they add up to about 26.5 hours of content.

In this fantasy world, I’m getting uncut, pristine new transfers of The New People for my $100. Maybe even a Blu-ray set with high definition transfers. The alternate, unaired hour-long version of the pilot episode is included, of course. Perhaps some bonus features, like a documentary exploring Rod Serling’s involvement with The New People.

Let’s be honest: to own The New People, I’ll gladly spend $100 for lousy VHS copies of the episodes.

Uncut Episodes or No Sale?

When it comes to obscure television shows, it’s hard to be picky. A perfect DVD release may not be possible. Earlier this month, Kino Lorber announced plans to release Coronet Blue on DVD. No details are available yet but I’m hopeful the episodes will be uncut and the quality will be decent if not great. I’m planning on lifting my self-imposed moratorium on buying classic TV on DVD for this show.

In terms of price, let’s go back to Shout! Factory and The Defenders. If Shout! can offer 32 episodes for $44.99, I’d like to think Kino Lorber can put out 13 episodes of Coronet Blue for considerably less. But who knows. The DVD set may very well end up with a high price tag due to licensing fees and costs to transfer the episodes. Do I want to pay $45 for Coronet Blue? No, but I will.

What happens if the episodes aren’t uncut? Is that a deal breaker? Uncut episodes are important to me, as both a viewer and an amateur historian, but if the only way to own Coronet Blue on DVD is to accept edited episodes, am I okay with that? The Life and Times of Grizzly Adams is only available on DVD with edited episodes. It will probably never be available uncut. Fans either have to suck it up and purchase the edited DVDs or go without the show entirely.

There’s also the issue of music replacements. I doubt it will be a problem with Coronet Blue but many TV shows, popular and forgotten, are released on DVD with music replaced. For some people, that may be a deal breaker.

Given the choice, I’d much rather own obscure TV shows on DVD rather than stream them. DVDs are mine forever, at least until they’re too scratched to play properly. Streaming availability lasts until a license expires and then the episodes disappear. Currently, I subscribe to both Netflix and Amazon Prime. Let’s say Hulu announces it has acquired all 17 episodes of The New People. Would I spend $7.99 a month to subscribe to Hulu to watch The New People. You bet. I’d even pay $11.99 a month to watch them without commercials.

Actually, I’d probably sign up for the 30-day free trial, watch the episodes, and then cancel my subscription.

How much are you willing to pay for your holy grail on DVD? Will you subscribe to a streaming service if it acquires your holy grail? Are edited episodes or music replacements a deal breaker? Hit the comments with your thoughts.

41 Replies to “How Much Would You Pay for Your Holy Grail?”