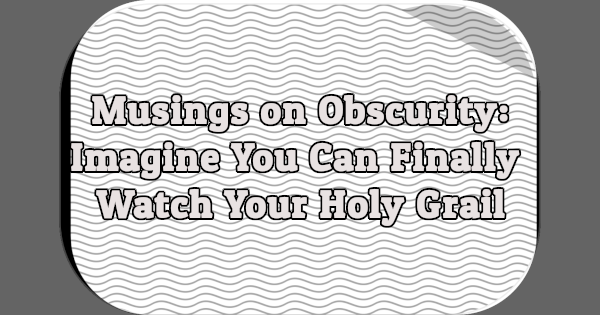 I suspect most visitors to Television Obscurities have at least one “holy grail” TV show they desperately want the opportunity to watch. At the top of my holy grail list is The New People (ABC, 1969-1970). If I ever get the chance to spend a few days doing research at the UCLA Film & Television Archive, you can bet one of the first things I’ll do is sit down and watch as many episodes of The New People as I can.

Imagine your holy grail suddenly becomes available. If you’re a fan of physical media, you can buy it on DVD or Blu-ray. If you prefer streaming, you can watch it on Netflix, Amazon Prime Video, Hulu, or whatever streaming service you prefer. As long as we’re pretending, assume the episodes have been remastered and are uncut with all the original music intact.

Given the opportunity to watch your holy grail TV show, after waiting and hoping for so long, you now have to decide how quickly to watch it. If the show lasted a full season, you have somewhere between 22 and 39 episodes to get through. That’s between nine and 16 hours for a 25-minute sitcom or between 18 and 32 hours for a 50-minute drama. (The math may vary considerably depending on how old the show is and how many episodes there are). For short-lived TV shows, you may be looking at just a handful of episodes.

Would you plan a marathon and watch most or all of the episodes in one sitting (also known as binge watching)? Or would you horde the episodes, watching one each night or even one each week so they last longer? Remember, this is the TV show you’ve potentially spent decades waiting to watch, or watch again. To be honest, you probably lost hope and decided you would never have the opportunity to watch it. If you burn through the episodes as fast as possible, that’s it.

I think I would want to watch the episodes as slowly as possible. So, one episode a week. That’s assuming I have the willpower to pace myself.

Of course, there’s always the chance you won’t enjoy your holy grail as much as you thought you would. If that’s the case, it’s possible you’ll have to force yourself to sit through every episode rather than struggle not to watch the episodes too fast.

If you’re one of the lucky ones and your holy grail is already available, how did you handle watching it?

15 Replies to “Musings on Obscurity: Imagine You Can Finally Watch Your Holy Grail”