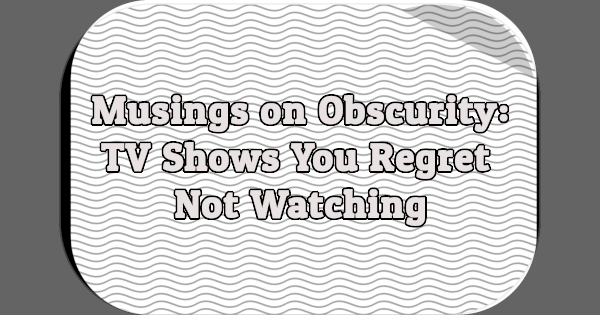 The longer you’ve been watching television, the more TV shows you’re aware of, even if you didn’t actually watch them. Maybe you saw promo spots or read an article in TV Guide or the newspaper or online. Nobody can watch everything. Even the most obsessive TV fans have to pick and choose what they watch. That likely means everyone has at least one TV show they wish they had watched, a TV show they regret not watching.

These days most network shows, even those that are cancelled quickly, have an afterlife. They may be available on Netflix or Hulu or Amazon Prime or some other streaming service. Maybe they’re available at the network’s website or On Demand through cable. Maybe they’re for sale as digital downloads through Amazon or iTunes. Maybe they even come out on DVD. That means if you didn’t watch a show during its original network run, you probably have an opportunity to watch them later. The window may not last forever–shows disappear from streaming services and network websites all the time–but it’s a second chance to watch a TV show you missed.

Even 10 or 15 years ago, if a network TV show went off the air quickly you were probably out of luck unless it ended up on a cable channel owned by the same media conglomerate or came out on DVD. Go back to the 1950s, 1960s, or 1970s and aside from summer repeats for one season wonders, when a TV show went off the air that was it. If you were lucky, decades later the show popped up on a cable channel in the 1980s or 1990s.

For the purposes of this column, a TV show you regret not watching has to meet two important criteria. First, you have to be old enough to have watched it when it was on the air. Second, you have to have known about the TV show during its original run but for whatever reason didn’t watch it. Remember, I’m much younger than many regular visitors to Television Obscurities. I can’t regret not watching The New People on ABC during the 1969-1970 season because I wasn’t born yet. Likewise, I can’t regret not watching The Outsiders on FOX back in 1990 because I was a little kid who only watched cartoons on television.

There is one TV show I do regret not watching: Karen Sisco. The crime drama starred Carla Gugino, Robert Forster, and Bill Duke. It debuted on ABC on October 1st, 2003 and went off the air less than two months later after just seven episodes. Three others never aired on ABC but did air on USA Network in 2004.

I can’t remember now if I saw promos for the show or read about it in the 2003 TV Guide Fall Preview issue. Nor can I remember why I didn’t watch it. All I know is I was interested in the show but for whatever reason didn’t watch it. Aside from USA Network, Karen Sisco also aired on cable channels Universal HD and Sleuth, but has never been released on DVD. It hasn’t streamed anywhere either, as far as I know. It looks like most of the episodes are on YouTube, but the video quality is atrocious.

Are there any TV shows you regret not watching? Share your thoughts in the comments.

10 Replies to “Musings on Obscurity: TV Shows You Regret Not Watching”