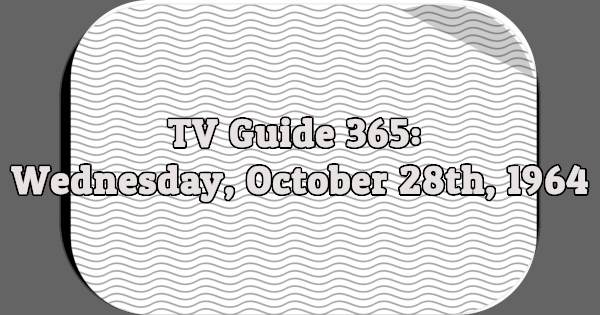 [NOTE: Both ABC affiliates in the Philadelphia market–WFIL-TV (Channel 6 in Philadelphia) and WTPA (Channel 27 in Harrisburg)–were either off-the-air or pre-empted Burke’s Law from 9:30-10:30PM ET and an installment of Politics ’64 from 10:30-11PM ET.]

7:30 VIRGINIAN–Western (NBC)
[COLOR] “Big Image…Little Man.” The Virginian finds an arrogant Eastern millionaire wandering dazed in the desert, but the dude will accept help only on his own terms. (90 min.)

OZZIE AND HARRIET (ABC)
The neighborhood kids entrust Ozzie with their jar of pennies and he borrows it for an evening of poker, unaware that the jar contains a valuable coin collection.

8:00 PATTY DUKE–Comedy (ABC)
“Patty, the People’s Voice,” speaks out in favor of T.J. Blodgett, an executive on Martin’s newspaper who’s running for Congress–and then abruptly switches her support to the other candidate.

BEVERLY HILLBILLIES–Comedy (CBS)
Jed’s attempts to break up a battle royal between Granny and Mrs. Drysdale bring him nothing but trouble.

9:00 MOVIE–Comedy
Wednesday Night at the Movies: “But Not for Me.” (1959) A stage-struck young secretary chases after her boss, a washed-up Broadway producer who’s almost twice her age. George and Ira Gershwin’s title song is sung by Ella Fitzgerald. Screenplay by John Michael Hayes. (Two hours)

DICK VAN DYKE (CBS)
“Romance, Roses and Rye Bread.” Sally has a secret admirer–she finds a rose in her desk that smells like pastrami.

BURKE’S LAW (ABC)
[Not listed in this issue.]