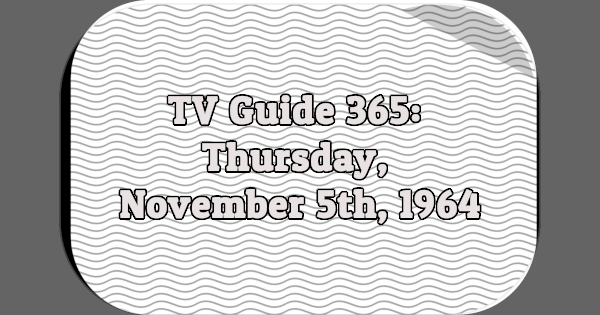 7:30 MUNSTERS (CBS)
“Tin Can Man.” Herman’s concerned over Eddie’s poor grades, and he’s not the only one.

FLINTSTONES (ABC)
[COLOR] Fred and Barney become involved in intrigue when they meet Dr. Sinister and his assistant, Madame Yes.

8:00 PERRY MASON (CBS)
“The Case of the Bullied Bowler” finds attorney Joe Kelly (Michael Connors) subbing for Mason, who’s temporarily out of the country. The Duchess, a small California town’s most influential citizen, has very personal reasons for having her son-in-law Bill Jaris’s bowling alley shut down. Kelly agrees to represent Jaris and his brother in the case. (60 min.)

8:30 DR. KILDARE–Drama (NBC)
“A Candle in the Window.” Kildare is concerned about nurse Lily Prentice’s emotional state after the death of her doctor-husband–she seems to be completely indifferent. Script by Rita Lakin. (60 min.)

BEWITCHED (ABC)
Samantha’s peeved when Darrin goes off to spend a Saturday in the office–with a girl reporter.

PEYTON PLACE (ABC)
Betty moves into a new household, but finds it’s not a home.

10:00 DEFENDERS–Drama (CBS)
“Turning Point.[“] Ken’s certain that Joey Americus’s execution for murder was a miscarriage of justice, so he begins his own investigation. But no one in Joey’s neighborhood is willing to co-operate. Script by James Lee. (60 min.)

KRAFT SUSPENSE THEATRE (NBC)
[COLOR] Milton Berle makes a rare TV appearance in “That He Should Weep for Her.” Jeweler Sam Morris, grief-stricken because he killed a teen-age robber, offers money to the family. But the dead boy’s sister has no intention of letting Sam soothe his conscience. Script by Halsted Welles and George Kirgo from Irving Pearlburg’s story. (60 min.)