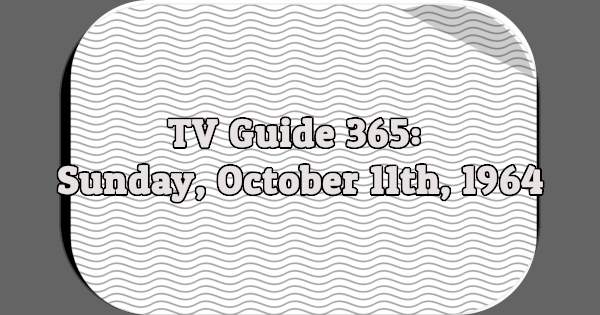 6:30 MISTER ED–Comedy (CBS)
When Gordon loses money playing pool, Ed gets the cue from Wilbur to win it back.

7:00 LASSIE–Drama (CBS)
An irate Maude Lester bursts into Corey’s ranger station and demands that something be done about the beavers that have dammed up a stream on her property.

7:30 MY FAVORITE MARTIAN (CBS)
Uncertain whether to return to Mars or stay on earth, Uncle Martin divides himself into triplets to take a vote.

WAGON TRAIN (ABC)
Cooper and Barnaby escort young Annabelle to Sam Race’s tent city of honky-tonks and card games, where Annabelle is dismayed to learn that Race hired her as a saloon girl–not as an entertainer.

BONANZA (NBC)
[COLOR] “Thanks for Everything, Friend.” Adam is saved from drowning by Tom Wilson, a handsome drifter who’s quite an expert in dealing with cards–and women.

MOVIE (ABC)
Sunday Night Movie: “The Miracle Worker.” (1962). Both Patty Duke and Anne Bancroft won Oscars for their performance in the film version of the award-winning Broadway dram about Annie Sullivan’s attempts to teach the blind and deaf Helen Keller. The screenplay is by William Gibson, who wrote the stage and TV versions. (One hour, 55 min.)

9:30 JOEY BISHOP–Comedy (CBS)
Pianist-raconteur Oscar Levant and his wife June appear as themselves in tonight’s episode. The last person in the world Joey would want for a house guest is Eccentric Oscar Levant–and guess who Ellie has invited for a visit.

10:00 CANDID CAMERA (CBS)
The camera catches the surprised faces of actors who come across blank pages in an audition script, and a tailor who finds his customer is a kangaroo. A little girl who doesn’t like spinach appeals to adults for help and temporary secretaries receive the personal phone calls of the girls they replaced. Allen Funt and Durward Kirby are the hosts.