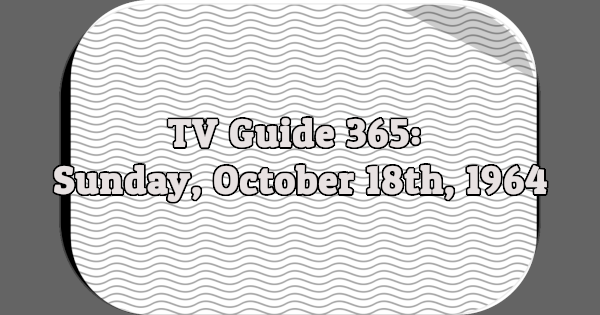 6:30 MISTER ED–Comedy (CBS)
“Ed Writes Dear Abby” when Wilbur opposes his idea of having a bachelor-horse apartment of his own. Columnist Abigail Van Buren appears as herself.

7:00 LASSIE–Drama (CBS)
Lassie tries to save a little girl who’s about to be run down by a bulldozer.

WALT DISNEY’S WORLD (NBC)
[COLOR] “The Tenderfoot,” first episode in a three-part comedy-drama based on James H. Tevis’s “Arizona in the ’50’s.” With a Stetson, a gun and three friends, young Jim Tevis heads West to make his fortune. He soon meets Captain Ewell of the Army Dragoons and Kit Carton’s crusty brother Mose. (60 min.)

WAGON TRAIN (ABC)
“The Barbara Lindquist Story.” Cooper goes to the aid of a stagecoach being fired on by bandits, and discovers that the sole surviving passenger is Bostonian Barbara Lindquist.

BONANZA (NBC)
[COLOR] “Logan’s Treasure” is the fortune in gold Sam Logan supposedly buried before going to prison, and now that Logan’s been released, quite a few people have their eyes on him.

MOVIE (ABC)
Sunday Night Movie: “A Hole in the Head.” (1959). A carefree but broke Miami hotel owner has high hopes of wheedling some cash out of his older brother, a staid and practical New York businessman. James Van Heusen and Sammy Cahn’s song “High Hopes” won an Oscar. (Two hours)

9:30 JOEY BISHOP–Comedy (CBS)
Larry leads his girl friend to the TV set and announces his surprise birthday gift: Joey’s going to broadcast birthday greetings for her. There’s also a surprise for Larry–Joey forgets.

10:00 CANDID CAMERA (CBS)
In photographic essays, the camera gives the impression that people trying to shoot an arrow are aiming at live Indians; and the walls of New York buildings being demolished come “tumbling down” in time to music. In stunts, a tourist is “accidentally” given a $500-a-day suite at the New York Hilton; and three teen-agers at a summer camp show how they would run the country. Allen Funt, Durward Kirby.

HALLMARK HALL OF FAME–Musical (NBC)
[SPECIAL] [COLOR] Ricardo Montalbon, Bert Lahr and Stanley Holloway in “The Fantasticks.” For details, see the Close-up on page A-21. (60 min).
“The Rogues” will not be seen tonight.