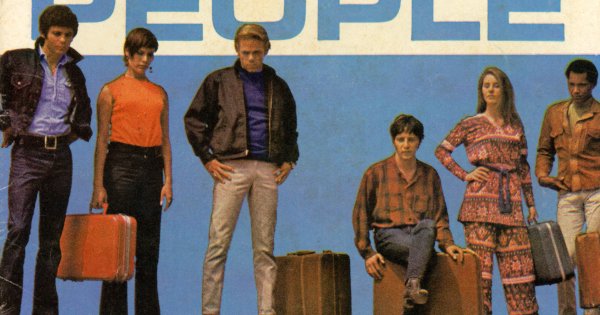 The New People (ABC, 1969-1970) celebrated its 50th anniversary last month so I decided it was finally time to review the second (and final) issue of Dell’s comic book based on the show. With a cover date of May 1970, the issue likely hit newsstands a few months earlier; The New People went off the air in January 1970. If you’ve never heard of the show, here’s the basic premise: a group of college students are stranded on an island and forced to build their own society. Fortunately, a town had been built on the island, stocked with food and mannequins, intended for an aborted nuclear test.

Like the first issue (which I reviewed in September 2014), this issue includes two 16-page stories.

The first story is titled “So Close…So Far” and involves the “new people” trying to build a signal tower. One of them, a young man named Tom, doesn’t want to be rescued. He tries to sabotage the signal tower and is able to weaken it enough so it collapses, breaking the arm of the group’s only carpenter. Tom then runs off and eventually gets his hands on dynamite. The others decide they need a police force with guns to protect themselves from Tom. Nobody wants to shoot him but he doesn’t have the right to stop them from being rescued.

As the story draws to a close, Tom lights the dynamite atop the signal tower. Once everyone else loses hope of being rescued, they’ll be able to focus on forming their own society on the island. They won’t want to go home. But Tom suddenly spots a ship in the distance. I won’t spoil the ending but it shouldn’t be a surprise to anyone how the story wraps up.

The second story is titled “Odd Man Out” and starts with a man in scuba gear attacking Carol while she’s sunbathing. She’s not sure what attacked her and the others aren’t sure they believe she was attacked at all. But just in case she was, they decide to have armed guards accompany work crews and anyone else who leaves town. Carol insists on going with some of the other girls to pick fruit. Despite their guard, Carol is abducted by the mysterious man in scuba gear.

Although neither of the stories in the first issue featured characters from the TV show, both stories in this issue do. Or at least they feature characters with the same names (Bob and George) as characters on the TV show. It’s impossible to say for sure whether they’re supposed to be the same characters or not. The artwork is too generic to match any character to their television counterpart.

It’s also a little surprising Dell published this second issue when the TV show had flopped. Maybe there was a contractual obligation to publish a second issue or maybe it had been written and inked and printed before the show ended, so Dell decided to publish it and hopefully make a little money.

Did you watch The New People on ABC during the 1969-1970 season? Did you read this issue of Dell’s tie-in comic? Hit the comments with your thoughts.