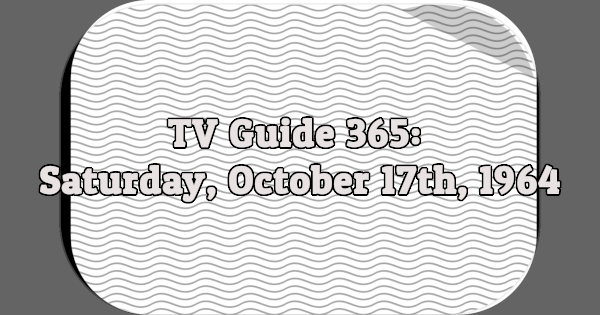 7:30 JACKIE GLEASON (CBS)
In his monolog, Jackie contrasts his Brooklyn boyhood with life today. Barbara Heller introduces the sketches: Rum Dum brewing an unusual cup of tea; problems in a beauty parlor; and the Poor Soul’s battle with a bellhop (Sid Fields). Reginald Van Gleasons [sic] continues his “vaudeville tour,” using self-hypnosis so he can be hurled, unharmed, through a plate-glass window, a bar door and a brick wall. (60 min.)

FLIPPER (NBC)
[COLOR] The “City Boy” is visitor Mike Belden, whose ways of getting “kicks” show no concern for water safety.

OUTER LIMITS (ABC)
“Demon with a Glass Hand.” A thousand years from now, the last man on earth returns to the 20th Century to find out why invaders from space killed everyone but him. Script by Harlan Ellison. (60 min.)

8:00 MR. MAGOO–Cartoons (NBC)
[COLOR] In “Moby Dick,” Magoo portrays Ishmael, only crew member of the ill-fated Pequod to survive an attack by the giant white whale.

8:30 GILLIGAN’S ISLAND (CBS)
In his sleep, the skipper blurts out instructions he once learned for converting a radio into a transmitter, but when he awakens, he can’t remember how to do it.

LAWRENCE WELK–Music (ABC)
There’s a hint of fall in tonight’s selections: “Indian Summer,” “The Big Apple,” “Red Sails in the Sunset,” “My Melancholy Baby,” “Put Your Arms Around Me” and “I Want a Girl.” (Live; 60 min.)

9:30 DINAH SHORE (ABC)
[SPECIAL] After a year-and-a-half year absence, Dinah returns to TV with the first of four nighttime specials. Her guests are comics George Gobel and Rose Marie, and “Fugitive” David Janssen, who join Dinah in a look at the baffling world of the modern teen-ager. Dinah’s daughter Missy, Rose Marie’s daughter Nupe and some 40 other youngsters also take part. Sketches: David and George ride in a hot rod; Dinah and David recall their first dance date; and George and Rose Marie portray the parents of a teen-ager (Dinah) awaiting her boy friend (David). A hootenanny wraps up the hour. Pete King orchestra. (60 min.)

10:00 GUNSMOKE–Western (CBS)
Hatred of Indians soars in Dodge after a man who wouldn’t harm a fly is slain and scalped. (60 min.)