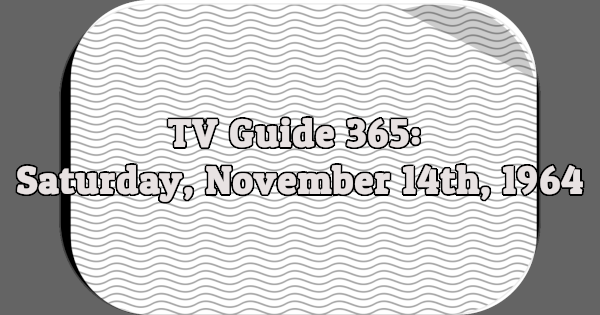 7:30 JACKIE GLEASON (CBS)
Jackie’s sketches: A traveling salesman tries to get to sleep in a second-class hotel; a pedestrian looks desperately for something to read during a newspaper strike; Rum Dum takes a whack at golf; and a TV weatherman becomes a victim of his own forecast. Frank Fontaine tells Joe the Bartender about Napoleon and Josephine. June Taylor dancers, Sammy Spear orchestra. (60 min.)

FLIPPER (NBC)
[COLOR] Mr. Marvello, a jobless ventriloquist, convinces the boys that Flipper can talk and wants to go away with him.

OUTER LIMITS (ABC)
“I, Robot.” Dour old lawyer Thurman Cutler comes out of retirement to take a most unusual case: defending an almost-human robot accused of murdering its creator. Script by Robert C. Dennis from a story by Eando Binder. (60 min.)

8:30 MUSICAL COMEDY (CBS)
[SPECIAL] Carol Burnett romps through the TV adaptation of “Once Upon a Mattress,” the off-Broadway musical that made her a star. The fairy tale is set in a dark hour of the Middle Ages: the supply of eligible princesses for Prince Dauntless the Drab (Joe Bova) is running low when who should clamber out of her bog and swim the castle moat but Winifred Woebegone (Carol), who’s heard of “an opening for a princess.” First telecast last June. (90 min.)
“Gilligan’s Island” and “Mr. Broadway” will not be seen tonight.

LAWRENCE WELK–Music (ABC)
Musical highlights include “Those Wedding Bells Are Breaking Up that Old Gang of Mine” (Quartet); “Jamaica Farewell” (Dick Dale); and “How Much Is That Doggie in the Window?” (Lennon Sisters). (Live; 60 min.)

9:00 MOVIE (NBC)
[COLOR] Saturday Night at the Movies: “Some Came Running.” (1958) The Vincente Minnelli film version of James Jones’ novel about postwar disillusionment. After his Army discharge, Dave Hirsch returns to his home in the Midwest, where he tries to find the key to a new life. (Two hours, 40 min.)