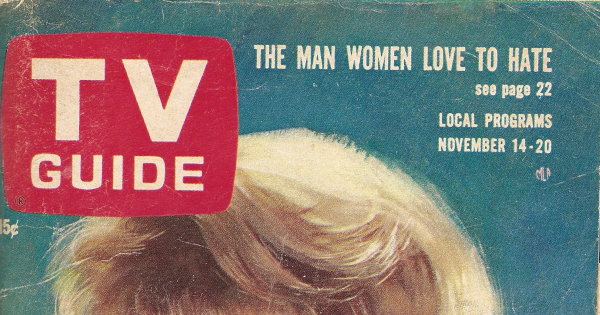 Of particular interest in this week’s national section is the As We See It editorial which notes that the networks are taking a hard look at their schedules and preparing to drop the ax on struggling shows. It urges interested viewers to write letters in support of their favorite shows, to try to help keep them on the air.

The 1964-1965 season started on September 14th so when this issue of TV Guide was published, it was eight weeks old. That seems like a long time for the networks to wait before deciding what to renew and what to cancel. Recall, however, that in 1964 the networks relied on national two-week Nielsen reports which were released a week or two after the two-week period in question. By this point, the three reports covering the first six weeks of the season had been released.

To help viewers writing letters, TV Guide operated a Viewer Service department that would deliver letters to the appropriate network executives. “Now is the time to write,” declared the editorial, “when option time is upon us and your favorite shows perhaps are in danger. We will see that your letter or card is forwarded to where it will do the most good.” 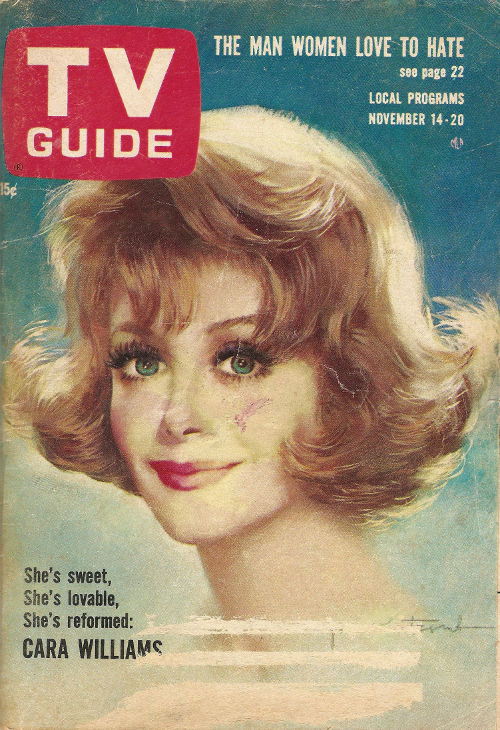 There are five articles in this issue. Arnold Hano’s “Mr. Franciosa Changes His Spots” is a profile of actor Anthony “Tony” Franciosa, who several years prior to starring in of ABC’s new sitcom Valentine’s Day declared he would never do series television. What changed his mind? The chance to “discipline” his acting style on television, a lack of available work in movies, and a general mellowing of his personality thanks to his third wife Judy Balaban.

Melvin Durslag’s article titled “‘Okay, blabbermouth, let’s see you try'” examines the unusual style of ABC sportscaster Paul Christman, who analyze American Football League (AFL) games for the network. I don’t know anything about football analysis but apparently Christman was quite unconventional although I can’t say I understand exactly why. Apparently he refused to prepare because he wanted to come to games fresh. Audiences seemed to like it.

I’m not very familiar with the life of Cara Williams, star of the new CBS sitcom The Cara Williams Show. Leslie Raddatz’s article “The Lady Was a Poker Player” makes her sound like quite the character, with a wild temper and a bad mouth. Her feminine comedy style — as opposed to the “masculine mannerisms” of Carol Burnett and Martha Raye — drew comparisons to Lucille Ball, comparisons she refused to acknowledge.

The most interesting article in the issue is “The Man Women Love to Hate” by Robert De Roos, a profile of Count Marco, a television personality appearing on KGO-TV in San Fransisco and KABC-TV in Los Angeles. I can’t tell from the article whether it was all an act or not but the good Count was apparently reviled by women who thought he was serious on television and in print through his weekly column.

He opposed the Girl Scouts (“Girls should be taught to bake cookies, not sell them. The only thing a girl can learn from selling cookies is how to solicit on street corners”), told women how to undress in front of their husbands (“Do you crawl out of your girdle like some old sea cow coming up out of a manhole for air, or do you slip seductively out and over it like the nymph in September Morn?”), and tried to sell fanny paddles with which people could smack fat women on the fanny. If any footage from his morning shows exist, I’d be very curious to see it.

The fifth and final article is a bizarre list of potential television concept from comedian Bill Dana, ranging from “Peter the Piano Tuner” to “Adequateman.” The national section also included two picture features: one looked at NBC’s upcoming special about the Louvre while the other documented how a bull was made up to look like a buffalo for an episode of The Beverly Hillbillies.

To call Cleveland Amory’s review of Slattery’s People in this issue positive would be an understatement. Amory was effusive with his praise for the series and quoted Representative James Corman, who cited the series in the Congressional Record. Sadly, Amory noted that few viewers were tuning in to Slattery’s People every week, a situation he blamed on the show’s “uncompromising unconformity” and the unusual titles of the episodes. He urged CBS to keep the series on the air.

There were just two news reports in the “For the Record” column this week:

The Hollywood and New York TV Teletype columns this issue included information on a number of pilots:

Not one, not two, but three letters in this issue were in response to the October 26th, 1964 episode of Voyage to the Bottom of the Sea (“Turn Back the Clock”) which reused footage from the 1960 film The Lost World (directed by Irwin Allen):

Just watched Voyage to the Bottom of the Sea’s episode “Turn Back the Clock.” They were very clever to insert scenes from “The Lost World” (which David Hedison also conveniently played in) to make up three-quarters of the show. Trouble was Hedison looked about eight years younger in the movie.
Ann Whitley
Cromwell, Texas

Did they have to turn the clock back to an old movie?
Mrs. Ann Lansing
El Paso, Texas

It is too bad that the producers of Voyage to the Bottom of the Sea did not realize that “The Lost World” was shown on Monday Night at the movies, Dec. 16, 1963, and also repeated this summer. If this continues it will be a voyage to the bottom of the ratings.
William Leniore
Slate Hill, N.Y.

TV Guide reached out to the associate producer of Voyage to the Bottom of the Sea, Allen Balter, who responded: “Fact is there was a minimum of stock footage from ‘The Lost World,’ no more than you ordinarily find in any film of this sort like 12 O’clock High or Combat! We did use one very spectacular cut in which two monsters fought and fell over a cliff. It would have cost a fortune to redo this.”

Other letters were about teenagers wanting to be treated like adults while fawning over “no-talent groups” like The Beatles, The Animals, and The Rolling Stones; the lack of David Niven on The Rogues; and a response to an October 24th article about Cathleen Nesbitt in which Harry Ackerman apparently insulted Minnesotans.

The big event in television this week didn’t actually take place. The apparently highly anticipated World Heavyweight Championship boxing match between Cassius Clay and Sonny Liston planned for Monday, November 16th was scrapped after Clay was rushed into surgery days earlier due to a hernia. The bout, which would have been a rematch of their controversial February 25th, 1964 fight, was postponed almost a year before finally being held in May 1965.

WHCT-TV (Channel 18) in Connecticut, the state’s Phonevision pay-TV outlet, was scheduled to carry the fight live from Boston at 10:30PM. The cost to watch the fight on television was $3.00, the highest price for a program on WHCT-TV I’ve yet come across. The station ran an advertisement for the bout: 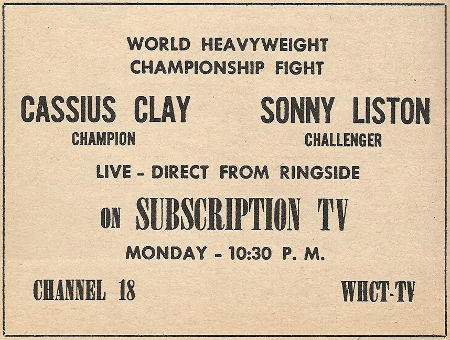 What WHCT-TV aired in place of the game is unknown. ABC’s Wide World of Sports was to include analysis of the first Liston-Clay fight by Howard Coswell on Saturday, November 14th. WNAC-TV (Channel 7) out of a Boston planned a half-hour pre-fight report featuring the station’s sports director John Callaghan interviewing both Liston and Clay. It was scheduled to air on Saturday, November 14th from 10:30-11PM but presumably was scrapped when the fight was postponed. I’m guessing all of the stations in Boston planned on discussing the fight during their news programs on Monday, November 16th. The day after the fight, NBC’s Today was scheduled to report on the outcome.

For those who remember 1964, I have to ask: was the Clay-Liston fight really as a big a deal as TV Guide makes it seem?

Aside from the boxing match, the week was pretty quiet. NBC aired the country’s second made-for-TV movie, The Hanged Man, as an installment of its Wednesday Night at the Movies. The telefilm starred Edmond O’Brien, Vera Miles, and Robert Culp. There were specials from Robert Goulet and Bob Hope. The anniversary of President Kennedy’s assassination was approaching, so CBS News aired an hour-long special on Wednesday, November 18th featuring interviews with the likes of Dean Rusk, Adlai E. Stevenson, Senator Hubert Humphrey, and Theodore Sorensen. WEDH-TV (Channel 24), Connecticut’s educational station, aired an hour-long special on Friday, November 20th called “An Essay on Death,” said to be a memorial to Kennedy that combined “a film story and narrative of readings selected from the works of poets and philosophers.”

In the previous issue, ABC ran full-page advertisements for its weeknight line-ups. This issue included ads for the network’s Saturday and Sunday line-ups. There were also plenty of ads for movies on Connecticut stations: twelve for WTIC-TV (Channel 3) and five for WNHC-TV (Channel 8). Some samples:

There was also this amusing ad for The Jack Benny Program on NBC: 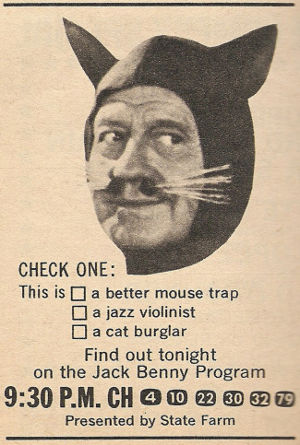 Several stations aired local programs on Sunday, November 15th. WBZ-TV (Channel 4) out of Boston had a half-hour program called Focal Point: United Fund from 4-4:30PM about settlement houses and boys’ clubs in Boston, which was followed by a live broadcast of the annual Yankee Infantry Division Show, hosted by Gene Jones from 4:30-5PM. And from 5-5:30PM was another installment of Starring the Editors.

Massachusetts stations WWLP (Channel 22) and WRLP (Channel 32) along with Connecticut stations WHNB-TV (Channel 30) and WHNB-TV (Channel 79) aired a half-hour discussion series called Concern from 3:30-4PM, moderated by Dr. Charles Warrnen Barnes, pastor of Hope Congregational Church in Springfield. The topic this week was “The Population Explosion” with Dr. Stephen Plank. WWLP and WRLP followed that with an hour-long discussion of civil liberties from 4-5PM.

Here’s an ad for WWLP’s Western Massachusetts Highlights, which aired weeknights from 7:15-7:30PM: 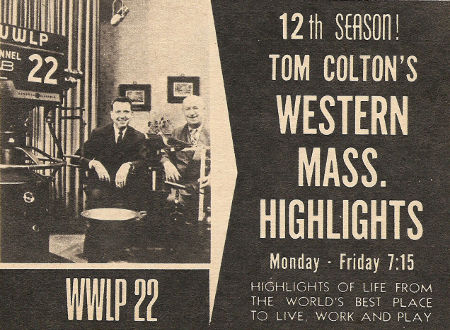