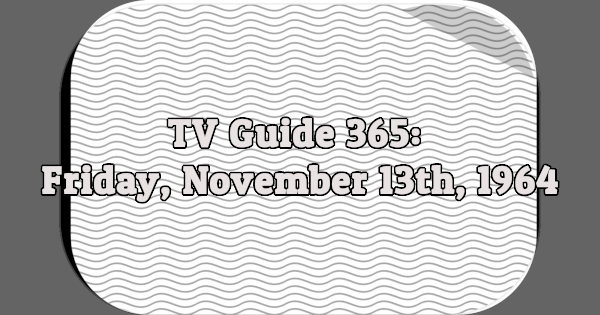 7:30 RAWHIDE–Western (CBS)
“Damon’s Road,” first of a two-part comedy drama. Railroad boss Jonathan Damon has a problem–he has to get more track laid but his crew walked off the job because they haven’t been paid. Damon decides to get Favor’s drovers to do the job, by hook or by crook. Script by Richard Carr and Robert Lewin. (60 min.)

ADDAMS FAMILY–Comedy (ABC)
Morticia and Gomez are entranced because newlyweds have moved in next door. The new neighbors, however, are horrified by the Addams family.

9:30 GOMER PYLE, USMC (CBS)
Saloon proprietress Hannah is quite adept at judo, and Sergeant Carter thinks it would be good fun to have unsuspecting Gomer try to steal a kiss from her.

JACK BENNY–Comedy (NBC)
The wives of David Janssen, Steve McQueen and Andy Williams are guests. In a sketch, Rochester tells why Jack never refuses to buy a raffle ticket.

12 O’CLOCK HIGH–Drama (ABC)
“The Hours Before Dawn.” During a bombing, Savage takes shelter in the home of a cynical Englishwoman who cares nothing about the war–and both of them end up as the prisoners of a downed German flier. Script by Donald S. Sanford. (60 min.)