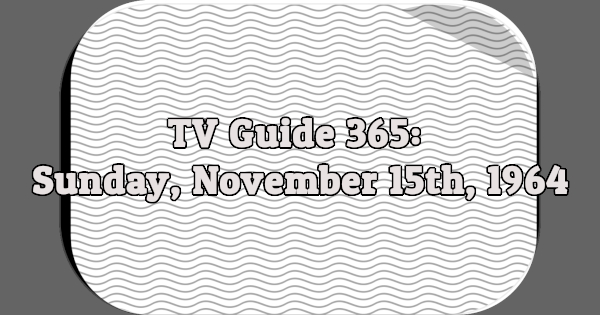 6:30 PROFILES IN COURAGE–Drama (NBC)
The year is 1917 and anti-German sentiment is rampant in wartime America. At a school in Brooklyn, all teachers are asked to sign a loyalty oath, but Mary S. McDowell, a Quaker, refuses–and becomes the object of pressures and vitriolic attacks. Script: Peter S. Feibleman. (60 min.)

7:00 LASSIE–Drama (CBS)
In the conclusion of a two part story, Lassie clashes with the leader of a pack of wild dogs.

7:30 MY FAVORITE MARTIAN–Comedy (CBS)
Martin wants to help Tim meet expenses, so he takes a job as a tutor to an insufferable little boy.

WALT DISNEY’S WORLD (NBC)
[COLOR] Actor Sterling Holloway has a role in both cartoons comprising this hour: He’s the voice of Amos, the Philadelphia churchmouse that inspires Benjamin Franklin in “Ben and Me”; and he narrates Disney’s animated version of Prokofiev’s “Peter and the Wolf.” (60 min.)

BEATLES (ABC)
[SPECIAL] Taped last May in London by “Shindig” producer Jack Good, this hour “Around the Beatles” offers the quartet and other British rock ‘n’ roll groups. John, Paul, Ringo and George do a full-dress parody of a scene from Shakespeare’s “A Midsummer Night’s Dream.” Other English talents on board: Cilla Black, P.J. Proby, Sounds, Inc., Millie Small, the Jets and the Vernon Girls. Director: Rita Gillespie.
“Wagon Train” is pre-empted.

BONANZA (NBC)
[COLOR] “Between Heaven and Earth.” Little Joe is ornery and trouble because fear keeps him from climbing a near-by mountain. (60 min.)

MOVIE (ABC)
Sunday Night Movie: “Birdman of Alcatraz” (1962) traces the life of Robert Stroud, who became a well-known author and ornithologist during a 43-year solitary confinement for the murder of two men. (Two hours, 30 min.)

9:30 JOEY BISHOP–Comedy (CBS)
Joey’s determined to prove to Larry that he isn’t henpecked–so he plans a night of poker with the boys.

10:00 CANDID CAMERA (CBS)
Irritated hotel customers prove that everybody doesn’t love a lover when a “Candid Camera” couple block a doorway to engage in a long embrace; a young woman devises a bell-ringing device to measure the degree of affection of men; a four-year-old offers his opinions on weddings; and an airline passenger attracts attention when he’s tricked into holding a woman’s purse. Durward Kirby and Allen Funt are the hosts.