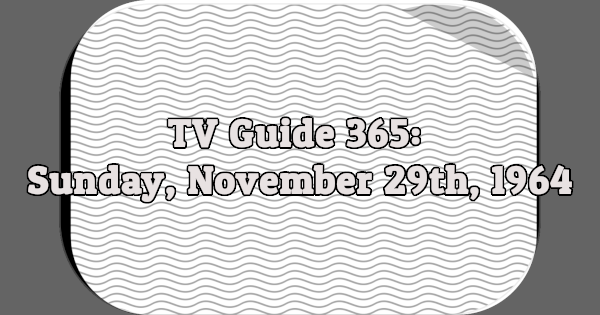 6:30 PROFILES IN COURAGE–Drama (NBC)
The year is 1850, and after thirty years in the Senate, Thomas Hart Benton of Missouri is not about to compromise. Although frmo a slave-holding state, he’s determined to block the introduction of slavery into the West. Written by A. J. Russell and directed by Lamont Johnson. (60 min.)

7:00 LASSIE–Drama (CBS)
Corey thinks Jim McKinnon would make a fine forest ranger, but the young man will need a college degree in forestry.

7:30 MY FAVORITE MARTIAN–Comedy (CBS)
Uncle Martin’s space ship is poised for take-off and sure enough off it goes–piloted by a little boy.

WALT DISNEY’S WORLD (NBC)
[COLOR] “Toby Tyler,” conclusion of a two-part story. Toby tells the circus folk he’s an accomplished trick rider–and then is called on to prove it. Based on the book by James Otis Kaler. (60 min.)

8:30 WORLD’S GREATEST SHOWMAN (NBC)
[SPECIAL] [COLOR] Films chronicle the career of movie director Cecil B. DeMille. Details are in the Close-up on page A-18. (60 min.)
Bill Dana and “Bonanza” are pre-empted.

[SPECIAL] [COLOR] Originally aired one year ago, this 90-minute program reviews the life and times of Cecil Blount DeMMille, who died in 1959 after a 59-year career in the production and directing of feature films.

MOVIE (ABC)
Sunday Night Movie: “Solomon and Sheba” (1959) When Solomon is made King of Israel, his older brother vows to destroy him, and the Pharaoh of Egypt sends the beautiful Queen of Sheba to undermine his rule. First telecast in January 1963. (Two hours)

9:30 JOEY BISHOP–Comedy (CBS)
The more she thinks about it, the more deprived Ellie feels–she married Joey without the benefit of a long, romantic courtship.

10:00 CANDID CAMERA (CBS)
Diminutive singer Linda Lou baffles toy shoppers when she portrays a mechanical doll that acts human; the camera catches women looking through a peephole labeled “For Men Only”; and the reactions of men lighting a cigaret for a beautiful girl whose two front teeth are missing. Durward Kirby and Allen Funt are the hosts.