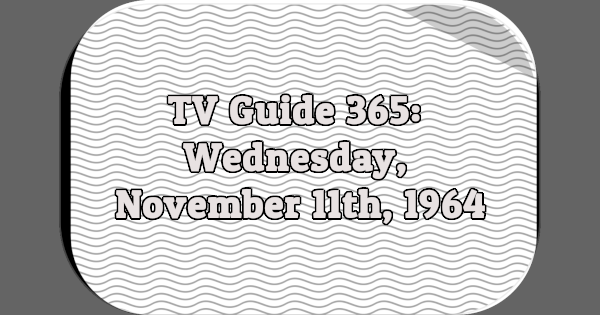 OZZIE AND HARRIET–Comedy (ABC)
The dean of men wants Rick and his fraternity brothers to take part in a practical joke.

8:00 PATTY DUKE (ABC)
“Patty and the Peace Corps.” Lying about her age, Patty applies for the peace corps–and receives a letter assigning her to Africa.

8:30 BEVERLY HILLBILLIES (CBS)
Jed’s attempts to break up a battle royal between Granny and Mrs. Drysdale bring him nothing but trouble.
Postponed from an earlier date.

9:00 DICK VAN DYKE (CBS)
In the conclusion of a two-part story, “The Alan Brady Show Goes to Jail”–to entertain the convicts. In their variety show, Buddy does a comedy monolog, Sally sings “In Them Old Cotton Fields Back Home,” and Rob and Laura sing “I’ve Got Your Number” and dance to “Sweet Sue.”

BURKE’S LAW–Mystery (ABC)
Out to kill Nicholas Amenor, the richest man in the world, an assassin with an air gun misses his target and shoots down Amenor’s bookkeeper instead. (60 min.)

10:30 ABC SCOPE (ABC)
[DEBUT] This series focuses on events, trends and personalities prominent in the week’s news. Tonight: “Pain Is My Enemy,” a documentary about the work of Dr. Gaine Cannon, an American physician who has spent many years caring for patients in the isolated mountain community of Balsam Grove, N.C.
Posponed [sic] from an earlier date.