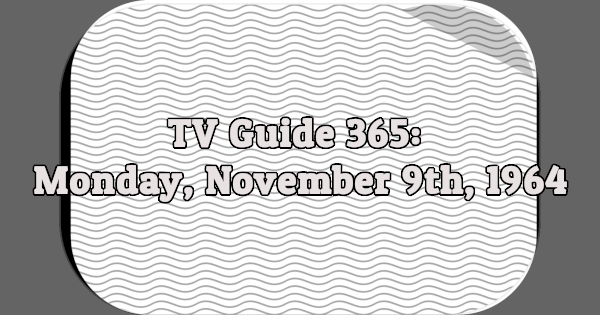 VOYAGE (ABC)
“Hot Line.” The Seaview is speeding two Russian technicians to disarm a defective Soviet atomic satellite due to fall near San Francisco–but one of the Russians is an imposter. Written by Berne Giler. (60 min.)

ANDY GRIFFITH–Comedy (CBS)
After Barney gives burly Fred Plummer a ticket for littering, Plummer threatens to give Barney a beating if he ever catches him out of uniform.

JONATHAN WINTERS–Comedy (NBC)
[SPECIAL] [COLOR] First of Jonathan’s eight comedy specials to be seen in this time spot. Details are in the Close-up on page A-35. (60 min.)
Andy Williams will not be seen tonight.

Mickey Rooney, Connie Francie and dancer Noelle Adams are guests in a taped show for which no script was written for the star. Winters, armed only with a wild and free-swinging imagination, faces a cast of rehearsed performers in the following: Man Under Pressure, The Many Things You Can Do With, Instant Situation.

BING CROSBY (ABC)
“The Dominant Male.” Joyce’s boy friend Don maintains that “the hand that rocks the cradle rules the world” and he challenges Bing to prove otherwise. Bing sings “How Deep Is the Ocean” and Don joins him in “Hallelujah, I Just Love Her So.” Songs: “I Gotta Right to Sing the Blues” and “John Peel.” Ellie: Beverly Garland. Joyce: Carol Faylen. Don Rutner: Gary Crosby.

10:00 ALFRED HITCHCOCK–Drama (NBC)
“See the Monkey Dance,” by Lewis Davidson. A young London broker, heading for an illicit weekend with his married sweetheart, runs into a gentleman who has strikingly similar plans. (60 min.)

BEN CASEY–Drama (ABC)
“A Thousand Words Are Mute.” Janet West, a 28-year-old professor of English, suffers a stroke that leaves her intelligence unimpaired but damages her ability to communicate. Recovery depends partly on the attitude s of those around her–but most of all on her own will. (60 min.)