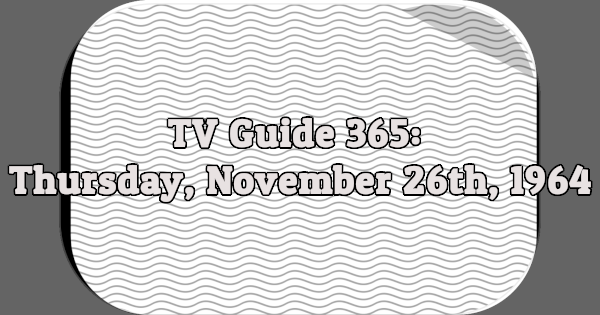 7:30 MUNSTERS–Comedy (CBS)
“Autumn Croakus.” Grandpa applies to a matrimonial agency for a compatible spouse, and the agency comes up with just the match.

FLINTSTONES (ABC)
[COLOR] There’s no love lost between Fred and Loudrock, his new neighbor, but it’s a different story with their dogs.

8:00 PERRY MASON (CBS)
“The Case of the Reckless Rockhound.” Reba Burgess, the widow of a mining-company executive, keeps a shoebox full of uncut diamonds in her bank safety-deposit box. They seem safe enough until a man from Reba’s past shows up with a document signed by her husband that gives him half her wealth. (60 min.)

DONNA REED (ABC)
“Surprise! Surprise!” Alex and Dave are working on a surprise birthday party for Midge, but the girls manage to keep stop steps ahead on all their plans.

8:30 DR. KILDARE–Drama (NBC)
“Rome Will Never Leave You,” conclusion. With their visit to the Eternal city approaching an end, both Kildare and Gillespie search for answers to their respective romantic dilemmas. (60 min.)

MY THREE SONS–Comedy (ABC)
Dinner at the Lotus Blossom Restaurant is a pleasant diversion for Steve, especially after he meets lovely Mei Ling, the proprietress.

BEWITCHED (ABC)
Samantha’s not one bit bothered that Darrin has to select a beauty-contest winner, but Endora’s faith in her son-in-law leaves a great deal to be desired.

9:30 HAZEL (NBC)
[COLOR] “A Lesson in Diplomacy.” Hazel has trouble controlling her temper at a particularly bad time–the Baxters are entertaining foreign dignitaries.

10:00 DEFENDERS–Drama (CBS)
“Comeback.” A once famous actress making her comeback is accused of drunken driving and hit-and-run. Preston, one of her old fans, defends her. Script by Edward DeBlasio.

KRAFT SUSPENSE THEATRE (NBC)
[COLOR] “Graffiti.” Gestapo agents pick up French Resistance leader Bertine, but fail to recognize the value of their catch. Because Bertine must be silenced before the Nazis realize who he is, his followers arrange for a young assassin to be arrested and placed in his cell. Script by Richard L. Adams. (60 min.)