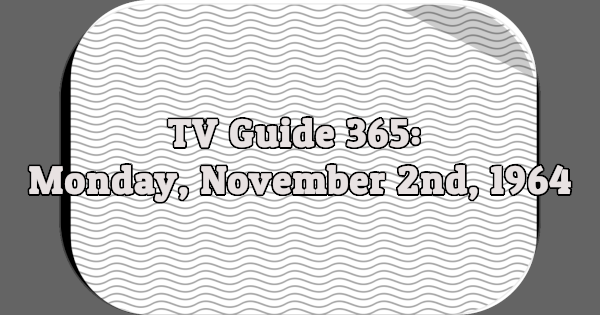 VOYAGE–Adventure (ABC)
“Village of Guilt.” A report that a sea monster has devoured some fishermen sends Nelson to Norway, where he finds the only eyewitness dead and villagers hostile and silent. (60 min.)

ANDY GRIFFITH (CBS)
After Barney and Thelma Lou have a spat, Andy agrees with Barney that she may not be the girl for him.

NO TIME FOR SERGEANTS (ABC)
“Will Gets a Right-Hand Man.” Grandpa Anderson joins Will on guard duty, but not by choice–he and Will are accidentally locked together in a pair of handcuffs. Will: Sammy Jackson. Grandpa: Andy Clyde.
Postponed from an earlier date.

9:00 LUCILLE BALL (CBS)
Lucy’s delighted with her job monitoring parking meters, and her joy knows no bounds when she writes her first ticket–even if it is on Viv’s car.

ANDY WILLIAMS (NBC)
[COLOR] Andy’s guest is Fred MacMurray of “My Three Sons.” Sketch: “Somewhere in France.” Andy portrays an orderly and Fred the commanding officer of the Singing 69th, a World War I outfit that is losing some of its best vocalists in combat. In another segment, Fred asks members of the Osmond family to ad lib a little harmony while he plays the saxophone. (60 min.)

WENDY AND ME (ABC)
Wendy hires a detective to trail her husband after she discovers a lipstick in the pocket of his jacket. At $35 a day, the detective has no trouble confusing Jeff with Danny. Landlord: George Burns. Wendy: Connie Stevens. Jeff: Ron Harper. Danny: James Calahan. Bundy: J. Pat O’Malley. George King: Stanley Adams.

BEN CASEY–Drama (ABC)
“Kill the Dream but Spare the Dreamer.” On temporary duty at a veteran’s hospital, Casey clashes with the head of neurosurgery, who devotes more energy to boosting patients’ morale than to surgery. Script by Lionel E. Siegal. (60 min.)