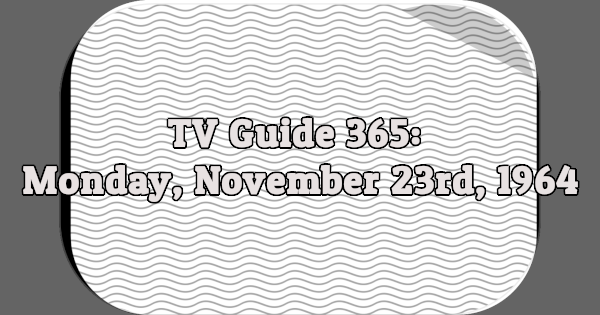 TO TELL THE TRUTH (CBS)

VOYAGE (ABC)
“The Magnus Beam.” The Seaview is dispatched to the Near East to locate the powerful weapon that’s been downing American U-2 planes. (60 min.)

ANDY GRIFFITH–Comedy (CBS)
Andy is considering accepting a job as a detective in another town, and Barney is contemplating taking Andy’s spot as sheriff.

9:00 LUCILLE BALL (CBS)
Lucy lost a contact lens while icing a cake for the bank’s benefit sale, and she’s sure it’s in one of the many cakes already at the bazaar.

10:00 ALFRED HITCHCOCK–Drama (NBC)
“The McGregor Affair.” In 19th-century Scotland, dim-witted John McGregor lives with his sodden wife Aggie and makes a living by hauling boxes to a nearby medical college. What McGregor doesn’t know is that inside these boxes are the corpses of murder victims. Adapted by David Friedkin and Morton Fine. (60 min.)

SLATTERY’S PEOPLE–Drama (CBS)
Barry Sullivan and Jeanette Nolan in “Question–What is Honor…What Is Death?” For details, see the Close-up on page A-36. (60 min.)

Slattery is vigorously opposed to House Bill 2319, a measure that would grant a multimillion-dollar tax rebate to eight corporations. Also against the legislation is James Patrick Shepherd, a member of the opposition party.

BEN CASEY–Drama (ABC)
“A Disease of the Heart Called Love.” At 42, warm and affable Miss Lydia Mitchum finds herself alone and pregnant, a situation complicated by a serious toxic condition. Script by Pat Fielder. (60 min.)