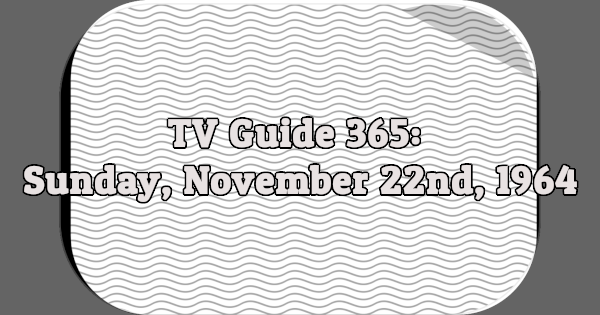 NBC’s “John F. Kennedy Remembered” will use films of his funeral to provide a background for a review of the White House years from his Inauguration to his death. The cortege will not be shown, but cameras will follow the cortege route and will pause along the way at various points where NBC correspondents will recall, in their own words and through the use of appropriate films, the high points of his career as President.

ABC’s “John F. Kennedy: His Two Worlds” will include films of the late President and his family in leisure hours as well as film studies of his active public life. Participating in the memorial will be people from various walks of life who were associated with Mr. Kennedy, ranging from Supreme Court Justice Arthur Goldberg to Mrs. Irene Guiney, the President’s seventh-grade teacher.

7:00 LASSIE–Drama (CBS)
A crisis develops while Lassie and Ranger Corey are working with handicapped children on a forestry project.

7:30 MY FAVORITE MARTIAN–Comedy (CBS)
Mrs. Brown happens to stand in front of Uncle Martin’s duplicating machine and zip–there’s two of her.

WALT DISNEY’S WORLD (NBC)
[COLOR] “Toby Tyler,” first of two parts, is the tale of a youngster who runs away from his foster home to join a traveling circus. Based on the book by James Otis Kaler, this film was released as a feature-length movie in 1960. (60 min.)

WAGON TRAIN (ABC)
Wealthy young Nancy Styles is determined to get to Denver–despite Hale’s edict that the train will by-pass the mile-high city.

BONANZA (NBC)
[COLOR] “Old Sheba” is an elephant, and Ben is aghast when Hoss and Little Joe bring the animal home in payment of a debt. (60 min.)

10:00 CANDID CAMERA (CBS)
The camera catches the reactions of a sales staff being lectured by double talker Al Kelly; children trying to see the back of their heads in a mirror; typists takng speed tests who find that their machines are typing Russian; and a research lab visitor who sees a fish double in size within minutes. Durward Kirby and Allen Funt are the hosts.